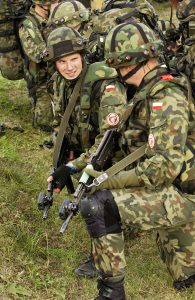 After watching Russian behavior in Ukraine and Eastern Europe, Polish armed forces are to undergo a massive restructuring from basing in the west of the country to face NATO during the Cold War as a part of the Warsaw Pact, to a forward deployment along the eastern border to counter Russia. The effort will involve thousands of troops and at least three military bases.

“The geopolitical situation has changed. We have the biggest crisis of security since the Cold War and we must draw conclusions from that,” Polish Defense Minister Tomasz Siemoniak told The Associated Press.

“I believe that what happened to the east of Poland does not represent a threat to us for the next months, or two or three or five years. It is a need to draw conclusions for the decades to come.”

“People have realized that security does matter and that you cannot forget about the army,” Siemoniak said. “No one wants war.”

This month, Russia and Belarus, the two members of the languishing Union State, which was formed after the collapse of the Soviet Union, will conduct the massive Zapad 2017 exercise involving thousands of troops along the western border of Russia, the exclave of Kaliningrad, and in Belarus. The war games have alarmed NATO member countries, especially the Balkans, which could be cut off easily by Russia.