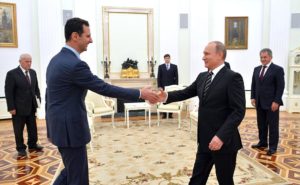 Kremlin spokesman Dmitry Peskov said that Russian support for Syrian President Bashar Assad is not unconditional. The chemical weapons attack against defenseless civilians, including many children and babies in Iblib, Syria, has galvanized the world against the Shia leader of the Levant.

“Unconditional support is not possible in this current world,” Peskov said, but added that “it is not correct to say that Moscow can convince Mr. Assad to do whatever is wanted in Moscow. This is totally wrong.”

Moscow and Damascus “enjoy a relationship of cooperation, of exchange of views and full mutual support,” Peskov said. Assad and his army are “the only real power in Syria that can resist terrorists on the ground,” he said, reports AP.

World powers are convening as we write at the United Nations to craft a resolution condemning the attack and calling for an investigation. Russia says a full investigation is needed before any action is taken against Syria and blamed the attack on opposition fighters who were manufacturing chemical weapons and were struck by Syrian jets, releasing the gas.

American Secretary of State, Rex Tillerson, is on his way to Moscow which will be the first direct meeting with Russian officials since Trump was elected. Moscow has created a detailed list of topics to be discussed.

Putin: I Am Not Your Friend, I Am The President Of Russia