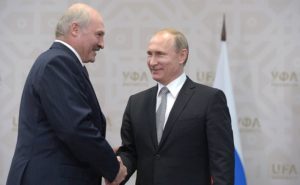 Russia and Belarus announced today they have settled their energy payment dispute which had led to heightened tensions between the two member of the Union State. The conflict had led to Russia even tightening border restrictions as bad blood over late Belarusian energy debts continued to rise. It seems Russia and Belarus have formulated a refinance of late payments that satisfied both sides. Belarus had also hinted at moving closer to the European Union and has rejected Moscow’s demands for a Russian air base to be located within the former Soviet republic.

Russian President Vladimir Putin said the Russian and Belarussian governments will implement the two leaders’ agreement within the next 10 days, and that a roadmap had been agreed for energy cooperation up to 2020.

Belarussian President Alexander Lukashenko, speaking at a joint news conference with Putin after their talks, confirmed the deal, and thanked the Russian leader for helping refinance his country’s debts to Russia, reported Reuters.

Russia had restricted border crossings with its neighbor and also reduced oil exports into Belarus which are critical to industry in ‘White Rus.’ The agreement was announced after a meeting between the two leaders in St. Petersburg, Russia.

West Should Prepare For Sudden And Turbulent Change In Russia