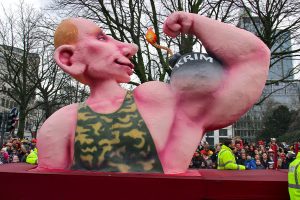 Trust in Russian President Vladimir Putin has dropped below 50% for the first time since the election on March 18th where he received 77% of the vote.

“The state-run VTsIOM pollster registered Putin’s trust levels dropping from a high of 58.9 percent on January 21 to 48.4 percent on April 15. The poll asked respondents to name politicians who they would “trust with important governmental questions.” Defense Minister Sergei Shoigu and Foreign Minister Sergei Lavrov ranked second and third in the list of most trusted politicians with 19 percent and 18 percent respectively,” reported The Moscow Times.

It is very important for the Kremlin to maintain at least the perception of high approval ratings as the Russian population is bearing difficult economic times mainly due to the Western response to Russia’s behavior in the American 2016 election and its actions in Ukraine, Syria. Many analysts believe the overseas direct actions have been carried out in order to keep the public’s mind off their economic problems. Social services have been cut in order to fund military campaigns abroad.

One positive in the Kremlin’s favor has been the jump in oil prices due to increased tensions in the Middle East where the world still gets 40% of its oil. America, Britain, and France just launched a large cruise missile strike against Syrian chemical weapons facilities and tensions between Iran, and Saudi Arabia, Israel are heating up.

The survey was carried out on April 8 among 1,000 people in at least 80 Russian regions, added The Moscow Times.