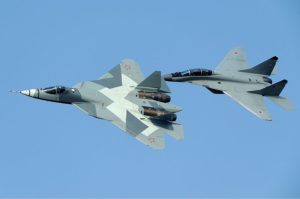 American pilots have long enjoyed air supremacy in the skies above any potential battlefield. That is rapidly changing, causing Air Force and Navy commanders to worry. Russia and China are both fielding 5th generation fighter aircraft in the coming years, hoping to rival the United States in controlling airspace above a conflict which is essential to victory.

Russia is planning to field the Sukhoi T-50, an aircraft built to rival the F-22 in capability, although the number of planes the Kremlin is scheduled to buy has been reduced due to economic pressures. Russian President Vladimir Putin has made military modernization a priority over domestic spending.

China also has new aircraft in the pipeline, some designed by Chinese engineers. The J-20 is designed to counter the F-22 while another aircraft in development is designed to resemble the F-35. Chinese cyber warfare most likely acquired the technology through theft of American technology.

“The most pressing challenge for the United States Air Force is the rise of peer competitors with advanced military capabilities rivaling our own,” Air Force Chief of Staff Gen. David Goldfein told lawmakers in June, days before being confirmed in the job, reports the Wall Street Journal.

China has historically relied on Russian designs, many older and some built domestically under license. That is starting to change with the new projects. The country’s air force “is rapidly closing the gap with Western air forces across a broad spectrum of capabilities,” the Pentagon said this year in its annual assessment of the Chinese military, reports the WSJ.

Initially posted at The Washington Times

Philippines To Open Bases For Russia

Azerbaijan Unable Or Unwilling To Pay For Russian Weapons

Russia Going After US Grain Customers