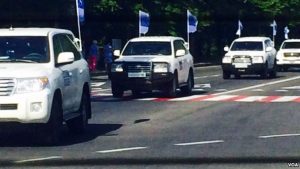 Russian President Vladimir Putin’s suggestion to station UN peacekeepers in Donbass to halt the fighting that has killed over 10,000 people is a nonstarter, if Russia only wants the front lines patrolled, not the rear areas where the Kremlin is shipping in aid and military equipment.

German Chancellor Angela Merkel, who has taken up the mantle of leadership on the issue with the West, said as much when the idea was first offered. “UN peacekeepers should have access everywhere where you placed the OSCE, that is, throughout Donetsk and Lugansk region,” she declared.

Putin recently seemed to offer up a compromise on the situation and suggested that current OSCE inspection areas could also be patrolled.

“Vladimir Putin elaborated on the Russian initiative to set up a UN mission to facilitate the guarding of the OSCE Special Monitoring Mission (SMM),” the Kremlin said, reported RFERL.

“In light of thoughts voiced by Angela Merkel, the Russian leader indicated a readiness to update the functions of the aforementioned UN mission in the Russia-sponsored draft resolution of the [UN] Security Council.”

“It is intended that UN peacekeepers could guard OSCE observers not only on the line of contact following the disengagement of both parties’ forces and hardware, but in other locations as well, where the OSCE SMM pays its inspection visits,” it added.

As always, the devil will be in the details.

“But the important thing is that the UN presence can be in the whole eastern Ukraine, not only along the contact line,” he added.

As far as Ukraine is concerned, the U.N. should not rubber stamp Russia’s de-facto occupation of the region and the ability to transfer weapons and material in and out.

“[The mission’s] purpose should not be the preservation of Russia’s occupation and the legalization of the Russian military presence, but a durable peace,” Ukrainian President Petro Poroshenko said on September 7.

“Its purpose should not be the preservation of Russia’s occupation and the legalization of the Russian military presence, but a durable peace,” Ukrainian President Petro Poroshenko said on September 7, reported RFERL.