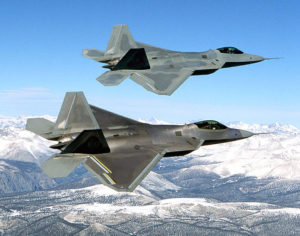 American fighter pilots came within 2,000 feet of Syrian, Russian-built, SU-24s without the Syrians knowing they were there. Two F-22s were involved after they were scrambled to support American special forces on the ground as Syrian aircraft threatened to drop ordinance in the area.

Last week’s incident, as described by commanders here, began in the afternoon, when a Syrian aircraft was spotted entering the airspace around Hasakah, and the pair of F-22s, already in the area, raced toward them, reported USA Today. At that point the only way to get information was to have the American pilots approach the Syrian planes, Su-24 Fencers, to determine if they were armed or dropping bombs.

The American pilots asked permission to get closer to the Syrian aircraft to determine if they were carrying weapons on their wings or appeared to be attacking ground targets. Normally pilots are under orders to keep their distance from Russian or Syrian planes to avoid a miscalculation, again reported USA Today.

Permission was granted. One of the F-22s watched as the other maneuvered behind the Syrian aircraft to get a closer look. After about 15 minutes, the Syrian jet left the area, apparently unaware it was being followed.

“I followed him around for all three of his loops,” one of the American pilots, a 38-year-old Air Force major, told USA TODAY in the first detailed account of the incident. “He didn’t appear to have any idea I was there.”

“The behavior stopped,” said Brig. Gen. Charles Corcoran, commander of the 380th Air Expeditionary Wing, which conducts airstrikes in Iraq and Syria from an undisclosed location in this region. “We made our point.”

“I’m thinking how do I de-escalate this scenario to the best of my ability and also keep us in a safe position while doing so,” said the second pilot involved in last week’s encounter, a 30-year-old captain.

“All I needed at that point to shoot them down was a report from the ground that they were being attacked,” Maj. Gen. Jay Silveria said from the Middle East Air Operations Center. “We were in a perfect position to execute that with some pretty advanced weaponry.”