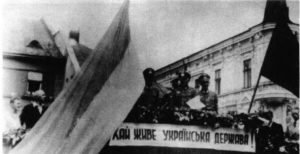 When the Wehrmacht invaded the USSR on June 21st 1941 it entered what today is Western Ukraine and encountered a Red Army that was woefully unprepared for war. Seasoned officers who fought in the civil war of 1918 were repressed and replaced by an ideologically pure but inexperienced officer corps during the bloody Stalinist purges of the 1930’s. The Red Army turned heel and ran with entire divisions surrounded and captured.

The Germans also encountered a civilian population of ethnic Ukrainians still reeling from the intentionally induced hunger by crop confiscation of the early 1930’s. It was a fact well known to all at that time that many of the planners of this genocide directed against the Ukrainian people were Bolshevik Jews. As such the homicidally anti-Semitic Germans were greeted by many Ukrainians as liberators rather than occupiers. This was particularly true for the more ethnically pure, non-Russified, Ukrainian speaking part of the population. An entire military division was formed from these elements and fought alongside the Nazis committing many atrocities along the way.

It was only after the Nazis exhibited their disdain for the Slavic Ukrainians, placing them only just above Jews on their racial ladder, and only after the Red Army regrouped and started counter-attacking the German forces deep in the Russian steppes that the bulk of the Ukrainian population repudiated the Nazi collaborators and started fighting the Nazis as partisans readying the ground for the liberation of the Ukraine by the Red Army in 1944. Following this liberation and the re-establishment of Soviet rule in the Ukraine, any remaining Ukrainian nationalist elements were harshly suppressed as traitors to the Motherland. Khrushchev’s gift of the Crimean Peninsula to the Ukraine following Stalin’s death in the mid-1950’s was intended as an olive branch after the traumatic events of WWII. Khrushchev was the Communist Party boss in the Ukraine immediately after the war and had firsthand knowledge of the mood of the local population.

This narrative, while largely forgotten by the West with its sclerotic memory, is burnt with blood into the psyche of every Russian and Ukrainian citizen and is the backdrop to today’s political events in the Ukraine and the Crimea. Putin’s plan for the reincorporation of the Ukraine into the Russian empire is rather simple. First he took by force those areas of the country that have little or no historical ties to the Ukrainian people or culture. These include the Crimea, which was a protectorate of the Ottoman empire populated by Muslim Tartars until occupied by Russia in the late 18th century, and the Donbass, a region in southwestern Ukraine that was wild and sparsely populated by non-Ukrainian Kazaks until the discovery of its rich coal deposits in the late 1800’s. The population in these areas is primarily ethnic Russian and Kiev’s rule there has never been popular.

Taking over the Ukrainian heartlands in western and northwestern Ukraine poses a much more difficult problem; the folks there still feel closer ties to Poland and the West than to Russia as has historically been the case. These are the same people who (at least initially) welcomed the Wehrmacht as a liberating force and may even now put up forceful resistance in order to provoke intervention form NATO forces should Putin attack.

Taking decisive action against the Kiev government with the popular support of his own constituents requires from Putin a narrative that paints the Ukrainian leaders as the direct ideological descendants of Nazi collaborators of the early 1940’s. This narrative is crude, but effective: just like in 1941, extreme right genocidal elements have taken over the peaceful (and Slavic!) Ukrainian people with active help from Western powers bent on destroying the Russian Motherland in its historical role as protector of all Slavic peoples. Once again, just like in 1944, the magnanimous Russians will have to shed their blood, sweat, and tears in order to liberate the Ukrainians from this right-wing tyranny and help them rejoin the family of Slavic peoples as prodigal sons.

This narrative is being built in the Russian media by stories such as this one on Tsargrad.tv in which the Ukrainian special forces are described in gruesome detail as torturing dissidents by electrocution and by slow suffocation via an inoperative gas mask. A pregnant woman describes her baby being literally “kicked out of her” by Ukrainian operatives. A class of political prisoners being help in special “concentration camps” with no access to legal aid is described as dating back to 2014. 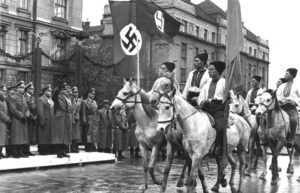 It is doubtful that Putin has any expectations of such stories (whether or not they contain a kernel of truth) making a difference in the public opinion or government policy in the West; rather the steady drumbeat and escalating graphic nature of these stories is intended to draw direct parallels in the minds of Russians between what is happening in the Ukraine now and what nearly happened then. All Russian grew up on WWII stories of Ukrainian Nazi collaboration and how it nearly won the war for the Nazis and their receptiveness to this narrative should not be underestimated.

The Russian will to endure hardship in order to repulse any threat to their sovereignty has already been underestimated by many including Napoleon and Hitler. The fate of these two at the hands of the Russians is a matter of record. Today’s western leaders would be wise to recall the lessons of history when calculating their next moves vis-à-vis Russia. \ 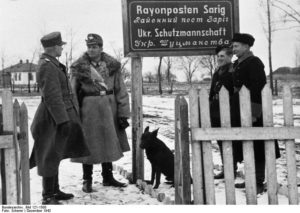