Massive explosions rocked northern Syria’s Latakia countryside on Monday night hours after a buffer zone deal was announced by Russia and Turkey. The deal appeared to mean a large Syrian regime offensive in Idlib would be postponed. But hours later as people sat down to enjoy nargillah and listen to music in Latakia, explosions were heard and air defenses came online.

On Iran’s Execution Of Kurds And Its Desperate Saber Rattling

Syrian regime media reported that “foreign objects” had been targeted and commentators immediately began to point a finger at Israel. The first reports were around ten in the evening. It came two days after air defenses were also activated over Damascus International airport to confront what the Syrian regime said was an Israeli airstrike.

Some of the first reports

The explosions that began at ten continued for almost an hour as more air defenses were activated and rumors said there had been attacks elsewhere. Many commentators continued to point a finger at Jerusalem. Danny Makki tweeted “No doubt the attacks this evening in #Syria were done by #Israel, the frequency and scope of raids in Syria has increased significantly over the last few weeks.”

The initial Latakia explosions allegedly targeted a technical organization or facility, in an industrial zone. Video showed the interceptions and people partying in the background could be heard.

Syrian TV initially blamed Israel but it was a mixed message because other state media also said “foreign objects” while some tweeted “drones” and “cruise missiles.” Charles Lister wrote “Likely #Israel airstrikes just hit a scientific research center – reportedly linked to the SSRC – in #Latakia.” Leith Abou Fadel noted that people took the airstrikes in stride, walking around and watching the show.

The proximity to the buffer zone deal is interesting. Syrian media and other media that supports the regime had been tweeting about the buffer zone deal just hours before. The regime sought to show that its air defenses could down foreign missiles or stop an attack. But why the confusion over where the attacks took place? 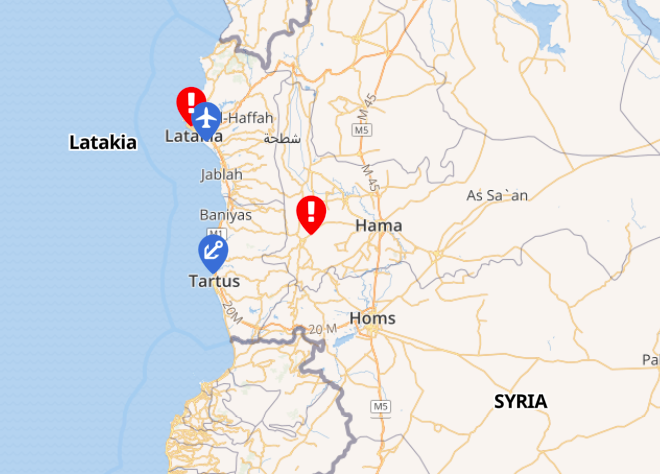 One of the issues is that any airstrike in this area has to deal with air defenses of Russian facilities, including at the naval base at Tartus and the air base at Khmeimim. The air base has been harassed by drones in recent years, often allegedly flown from Idlib. Also Israel has been accused of striking an area near Masyaf in recent months.

As recently as September 10 satellite images were released of an apparent airstrike on Masyaf. This also comes after early September reports that Israel dramatically increased its airstrikes in Syria, mostly targeting Iranian targets. In fact on September 17 a report indicated that more than 100 Iranians and their allied militias had been killed in these air strikes.

Reports claimed that missiles might have targeted an area near Latakia and also near Tartus or Hama and Homs. These areas are not as far apart as many reports make it seem. Hama to Masyaf is 45km. Masyaf to Latakia is 90km, while Latakia to Tarus is 80 km. So the triangle of distances shows that a missile flying over one place and hitting another could easily be targeted by air defenses and seen from multiple locations, with each one reporting a “different” attack. If two locations were targeted the rumors that “Homs” and “Hama” were both attacked could be reported when in fact the attack took place between the two. Given the fact a missile can fly 10km in a few seconds, and an S-400 would fly 4km a second, it’s possible that human witnesses would make mistakes.

Around midnight rumors began to grow that the attack consisted of exactly 28 cruise missiles, a detail no could have known but was spread about to provide an exact number and thus appear more genuine.

Americans: It wasn’t us

A US statement after the attack denied the US had anything to do with it. According to Carla Babb, “Pentagon spokesman Navy Cmdr. Sean Robertson tells VOA on Syrian claims of engaging missile targets over #Latakia “I can unequivocally say this is not us.”

This would be huge if confirmed. https://t.co/MoXgyTCfSQ

The Consequences Of Adding Hezbollah To German Terror List