Illegal immigration is a confusing issue, with many facts and figures begin bandied about; it is difficult for the average American to understand what is really happening. However, most people do understand their economic future, the ability to feed their families, has been harmed by this phenomenon, and they want something done about it. This was the impetus behind President Trump’s election victory in 2016. Illegal immigration, and his promise to build a big, beautiful wall, were the centerpiece of his bonding with the American people, and his stunning, upset victory over Hillary Clinton.

The first thing you have to do when you want to fix a problem, is to understand the problem. A new video called America’s Great Wall, produced by Burt Keefer, goes a long way in helping ordinary Americans understand the details behind the issue. Learning these concepts will enable patriots to appropriately pressure their representatives to help Trump enforce his agenda.

Keefer starts the video by explaining that many administrations and politicians have promised to do something about illegal immigration, correctly outlining the problem, only to renege on their promise to the American people once in office. Here are some examples…

We all agree on the need to better secure the border and to punish employers who choose to hire illegal immigrants. You know, we are a generous and welcoming people here in the United States.
But those who enter the country illegally and those who employ them disrespect the rule of law.
Barack Obama (2005)

We can enforce our borders. I think we should enforce our borders. To have a situation where 40% of the babies born on Medicaid in California today are born of illegal immigrants, creates a very real problem for the state, which is in deficit. To have 17% of our prison population at a cost of $300 million a year, the illegal immigrants who come here and commit felonies, that’s not what this nation is all about.
Dianne Feinstein (1994)

Mexico is such an important problem. Mexican government policies are pushing migration North. There isn’t any sensible approach except doing what we need to do simultaneously. You know: secure our borders and technology and personnel, physical barriers if needed.
Hillary Clinton (2006) 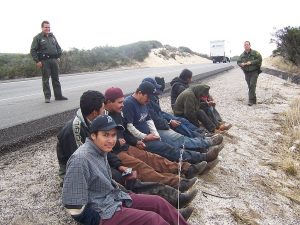 In Keefer’s view, the North American Free Trade Agreement, or NAFTA, was not in essence a trade agreement. It was a pretext for the establishment of a ‘North American Union’, an entity that would put American on the road to George H. W. Bush’s ‘New World Order’, run by the United Nations. In other words, a complete abandonment of United States sovereignty.

“Proponents of the agreements argued that free trade was going to provide an economic benefit to all,” the video narrator states. “But unfortunately, it was never about free trade, but rather the creation of a North American union.”

Keefer outlines how illegal immigration is not a partisan stain on America, it is illegality pushed by both parties, to further the globalist agenda. The original amnesty of 1986, put 2.7 million illegal immigrants on the voting roles. Little do Americans know but there have been six more amnesties, with DACA being pushed as the seventh. In addition to more Democrat voters, the legislation promised border control and employer verification. Neither has been even partially implemented.

The Hi-Tech Traditionalist: Trump Is The Perfect Antidote To Progressive Poison

“We’ve already granted 7 amnesties,” the video states before beginning to introduce what is a 12-point plan to finally address illegal immigration. That includes (9) “abolishing all sanctuary cities and prosecuting anyone who disobeys.”

I would encourage all Americans to become informed. Watch the video. Help Trump stop this crazy illegality and the destruction of our security and culture. Share the video with your friends. You’ll thank us later.