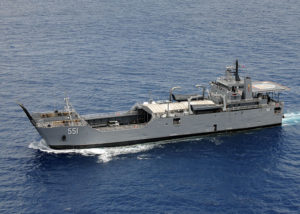 China claims just about all of the Spratly Islands in the South China Sea as their sovereign territory. Unfortunately for them, most of the islands are also claimed and controlled by the Philippines, Vietnam, Malaysia and Taiwan. Second Thomas Shoal is one of those small bits of submerged land under dispute between the Philippines and China. The PI actually intentionally grounded an old, American-built landing craft there almost 20 years ago to serve as a temporary military base. About a dozen Filipino servicemen are kept there ‘round the clock.

There is a pending arbitration underway at The Hague over the conflicting claims by China and the Philippines in the region. China has said it will flout international law and ignore the rulings of this tribunal, possibly because it realizes it will lose the case. This week, the communist People’s Republic threatened to “drag away” away the base if they desired to, reported the South China Morning Post.
“The story of the Renai Shoal [shows] China is fully capable of dragging away that Philippine vessel hanging in there,” People’s Daily said. “But for the stability of the South China Sea, China offers goodwill and patience and has always shown high restraint.”

“The Chinese government has the right and capability to take back the islands and reefs illegally occupied by neighbouring countries, but we did not,” said Deputy Foreign Minister Liu Zhenmin in November of last year. “Whether China takes action depends on how the Philippines and the U.S. behave.”