Iran armored force is antiquated and has been almost nonexistent since the conclusion of the Iran Iraq War. The T-90, although not a front line tank, would give Iran a much needed boost in its armored capability at a reasonable cost. Iran has signaled to Russia that it would rather build the tank in-country than buy direct from Russian arms manufacturers. 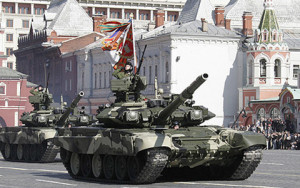 “Cooperation with Iran was suspended in accordance with the presidential decree “On measures to implement UN Security Council Resolution 1020 of June 9, 2010″. But if restrictions on military-technical cooperation with Iran are lifted, the corporation together with Rosoboronexport (arms exporting company) is ready to continue cooperation, in particular, on the licensed production of the T-90S tanks, modernization of the T-72S tanks and their production capacities,” Zharich said.