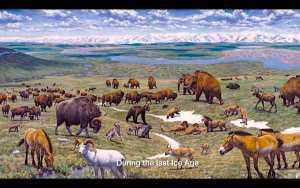 A prehistoric ice age ecosystem is slowing being recreated in Siberia. The effort is being mounted by Russian scientists to find a solution to the melting premafrost which is releasing methane and causing huge sinkholes in the Siberian tundra, and other problems. The infamous movie series Jurassic Park previewed the consequences of reintroducing extinct species through manipulation of DNA.

“Russian scientists are seeking to recreate the Ice Age ecosystem when woolly mammoths roamed here, and there is serious method in what some may see as their madness. Their purpose is to prove that the reintroduction of animals here will restore a landscape lost in prehistoric times and here’s the key thing: they believe it will crease an environment preventing Siberia’s permafrost melting by sealing in leaking methane,” wrote The Siberian Times.

Harvard University scientist George Church and his team are using DNA recovered from a long-extinct beast found perfectly preserved in the Arctic ice after dying 42,000 years ago. ‘Cold-resistant elephants would flatten the insulating snow and supporting trees in winter and favour the highly heat reflective grass in summer,’ he said recently. ‘They would also help capture new carbon by enhancing the photosynthetic capacity of the vegetation,’ added The Times.