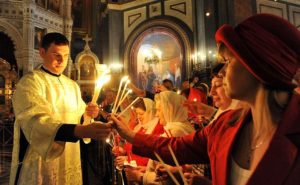 Good Friday is the most significant day in the religious calendar for Orthodox Christians around the globe and in Georgia. This day marks the crucifixion of Jesus Christ. Good Friday is also the beginning of a four-day official Easter holiday in Georgia and other Orthodox societies.

On this day Georgian believers color the eggs red, symbolizing the blood of Christ, rebirth and new life. 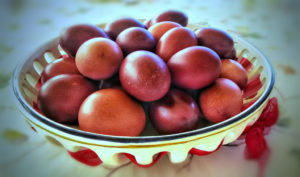 As the Holy Bible reads, after the Ascension of Jesus, Mary Magdalene went to the Emperor of Rome and told him that “Christ has risen,”. The emperor skeptically pointed to an egg on his table and shout: “Christ has no more risen than that egg is red.” After him saying this words the egg immediately turned blood red. This is what makes religious Orthodox keep this tradition of egg coloring for centuries. 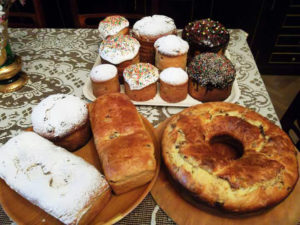 Paska is an Easter bread eaten in the  Eastern European countries including Georgia, Ukraine, south Russia, Romania, Moldova, Slovakia, and parts of Bulgaria. Christian symbolism is associated with features of Paska type breads. The inside of Paska can be a swirl of yellow and white that is said to represent the resurrection of Jesus while the white represents the Holy Spirit.

All this traditional food is prepared tonight, but, according to religious rule, those cannot be eaten today. Good Friday is considered as the most “heavy” day of the year for religious people. The most devoted Orthodox Christians eat nothing all day or only receive bread and water – As a way to express their grieve about crucifixion of Jesus Christ.

Also, Georgian Orthodox Christians believe no hard work should be done on Good Friday as the day is fully devoted to the Lord.

On Saturday night, the day before Easter Sunday, the most devout Orthodox Christians go to church and stay there overnight until late Easter morning. A special prayer and the ritual is conducted in almost every church across the country. 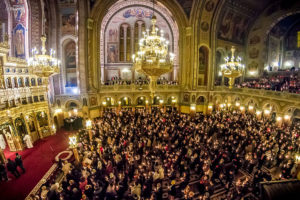 In two days from today, this Sunday, Georgians will celebrate Easter.

Easter morning begins with the most important part of the holiday, where neighbors greet and congratulate each other with the words: “Christ has risen”, this must be the first thing religious people tell each other while greeting each other.

After this comes the most traditional part of the holiday – visiting cemeteries. Every Easter Georgians bring food and wine to cemeteries and eat near the graves of their loved ones. This is the way of telling their ancestors Jesus has risen.

After the cemeteries, Georgians go back to their homes where they celebrate Easter with traditional Georgian wine and food along with their neighbors and loved ones. 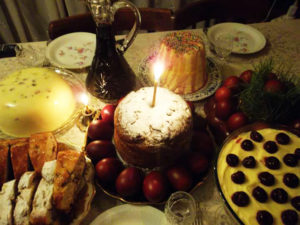