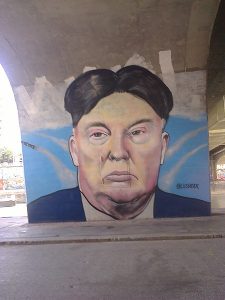 Russian Foreign Minister Sergey Lavrov was in Pyongyang Thursday, greeted with much fanfare on his way to talks with North Korean leader Kim Jong-un. It’s a little drop-by that reveals many things about Russia, its priorities in Northeast Asia and its approach to the crisis on the Korean peninsula.

A hallmark of Russian President Vladimir Putin’s foreign policy has been to re-establish Russia as a player on the world stage, a nation to be respected and reckoned with in global affairs. With President Trump pushing the parties forward for peace in Korea, there is no way the Kremlin could allow the U.S. president to get all the glory, or walk off with that Nobel Peace Prize.

Mr. Putin pays very close attention to his domestic image. The shirtless photos, the fighter jet flights, the lion-, tiger- and bear-wrestling — all are proof of that. Mr. Putin wants very much to be seen as a world player, heading a country seen as the indispensable nation in Russia’s “near abroad.”

With his military foray in Syria, he has already made great strides toward achieving this goal in the Middle East. Mr. Putin has split Turkey away from NATO and cozied up to Beijing and Tehran, forming alliances against U.S. global power. In Northeast Asia, the last thing Moscow wants is a fully unified, Western-aligned, economic powerhouse on the Korean peninsula.

It would be a loss of Russian prestige for Mr. Trump to resolve the Korean enigma while working with China and not the Kremlin. Moscow must be seen to be the power broker, the kingmaker behind the scenes.

Mr. Putin probably also wants to remind the world that North Korea itself was a long-term Russian project, having been established as a Stalinist state after the end of the Great Patriotic War, and remains so to this day. Moscow has been helping Mr. Kim with fuel deliveries, trained North Korean engineers in Siberia for transportation logistics, and has eased the consequences of Western sanctions by allowing a black market delivery trade on the Russia-North Korea border.

Mr. Lavrov put on a friendly face at the press conference while in Pyongyang.

“We are interested in seeing peace, stability and prosperity on the Korean Peninsula and in the entire Northeast Asia,” he said, adding Russia backed the declaration on cooperation signed by Mr. Kim and South Korean President Moon Jae-in at the April summit. “We are ready to facilitate its implementation in every possible way, particularly as it mentions railway projects that may involve Russia in the future.”

Also lurking behind the green curtain in Moscow and Beijing is the prospect of American rearmament and what that might mean for our Pacific allies, in particular Japan. Mr. Trump’s openness to the nuclearization of Japan, a position he floated during the 2016 campaign, was not lost on the dictators in Asia. This would be their worst nightmare. When combined with a unified, pro-Western regime on the Korean Peninsula, Mr. Putin and Chinese President Xi Jinping would not sleep very well at night. Perhaps this is why Defense Secretary James Mattis made it very clear the U.S. will be continuing and maybe even ramping up its “freedom of navigation” patrols to counter Chinese militarization in the South China Sea.

Trump Won’t Be Bullied Into A Summit With Putin, The Meet Or War Narrative Won’t Work

What we are witnessing is Mr. Trump putting together the mother of all deals. The laserlike precision that Mr. Trump has focused on his “America First” agenda, and the continued underestimation by the media of his accomplishments and very probable future success, make it likely he just might have a chance to get a deal done that benefits the U.S. and the world.

What is for sure is that Messrs. Clinton, Bush, and Obama never had the same chance. They just didn’t have the ability to pull it off. The Donald does.

A Cautionary Tale From Ukraine On Prosecutors And Power

The Hi-Tech Traditionalist: The Bolshevik Takeover Of America Part II – Destruction Of Church And Family