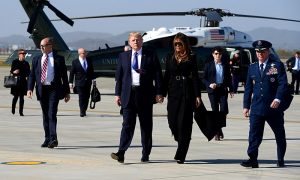 As people like Donna Brazile slowly come out and tell the truth about the Democratic Party and the 2016 election, the leftist-spun Russia narrative is collapsing. We now know that if anyone was “colluding” with Russia, whatever that is, it was Hillary and Bill and all their minions. Even the meeting with the Russian lawyer and Trump Jr. has been shown to be a setup by Fusion GPS, most likely paid for by Democratic operatives.

Yes, Special Counsel Robert Mueller has his first indictments. However, they really don’t have anything to do with President Trump and are more a pathetic attempt to tie him to some past possible corruption. I am sure the special counsel will try to find some business deal 10 years ago that may be questionable. However, the Trump legal team will fight that avenue of investigation, so that is another story to be told. For, after all, the Russia collusion investigation is not about Russia, it is about bringing down a president. We all know that. If it was really about Russia, Mr. Mueller would be investigating Hillary Clinton selling our uranium to Russia for money; but they are not, are they?

So what to do with Russia?

President Trump should trust his gut.

I recently had a request to give comments to a Russian television station in Moscow on President Trump’s lack of support for the Iranian nuclear deal that Russia was involved in “negotiating” with the Obama administration. The questions given to me were leading, suggesting that the United States withdrawing from the deal would endanger the world. My response to the media outlet was that just as Russian President Vladimir Putin said about his job, President Trump is not the president of the world, he is the president of the United States of America, and he should, and is, making decisions with that viewpoint in mind.

Mr. Trump feels this. It oozes from every pore of his being. He loves America, its people, what it used to, and can again, stand for. He is making America great again.

Mr. Trump should do only what’s right for America — America first, after all.

Mr. Trump’s instincts are right on target. First of all, as he showed with launching missiles into Syria with Russian soldiers only a few hundred yards away, or being firm with American air power patrolling the Middle East, or while rebuilding America’s nuclear deterrent, Mr. Trump realizes Russia is a formidable adversary that has to be confronted when she threatens American interests. American national security has to be first and foremost when making decisions about Russia.

Russian security forces, obviously in a well-orchestrated and long-term campaign, have attempted to disrupt Western society, much as they did during Soviet times. It worked to no small extent. Russian state media has purposefully made an enemy of the United States, more for domestic consumption and for political expediency than anything that reflects reality.

However, as irresponsible Western neo-Bolsheviks and anti-American power centers in the West gin up against any communication between Russia and the American government and scream “Russian collusion,” President Trump also realizes that Russia has the world’s largest nuclear arsenal, a competent and powerful conventional force and is capable of projecting power in most parts of the world. Russia also has a highly educated and talented workforce and could be an important trading partner in the future.

In other words, we have to talk to Russia.

We should also work with Russia where we can. There are many parts of the Trump agenda that coincide with the Russian agenda — protection of Christians around the world, for instance.

Stopping the tide of Islamic economic migration and terror, which Europe seems to have no desire to do, or even admit there is a problem, is another obvious area.

The United States worked much closer with the Russian government after the fall of the Soviet Union, and we can do so again. These ties are still there, although they will have to be rebuilt.

Some semblance of trust will have to be restored. The Obama administration had an almost knee-jerk, racist reaction toward Russia. Mr. Trump is slowly changing this.

This will take an effort by both sides. Russia is very adept at blaming the West for their problems while ignoring the stone in their own eye. The all-out hybrid warfare against the West has to stop. Whether this is possible is an open question.

President Trump can continue to show leadership in working with Moscow. The irresponsible and corrupt U.S. media will wail and gnash its teeth. However, facing this type of pressure is what leadership is all about.

Perhaps baby steps are in order to rebuild trust. Finding a solution to the Ukrainian issue, making peace in Syria to the benefit of all parties and resolving the North Korean threat are all issues where both sides could give and take and find a solution.

However, Russia must realize that the Trump administration is not the weak Obama regime it is used to dealing with. Active measures against our security and way of life will be confronted — and stopped.

In short, we can show the door is open to find a way forward for the good of both countries, because taking care of America first is what will help the world in the long run.

Polish Lawmakers Push On With Near Total Ban On Abortion