Iran’s Islamic Revolutionary Guard Corps says it fired six ballistic missiles at “Takfiri terrorists” in Syria in the early morning hours of Monday, October 1, 2018. This follows the targeting of Kurdish opposition on September 8 near Koya in northern Iraq. During that ballistic missile attack the IRGC used seven Fateh 110 missiles and fired them near Tabriz. Kermanshah is 200 km south of that launch location.

The IRGC says it fired six ballistic missiles at areas “east of the Euphrates” in Syria in an attack designed to retaliate for an attack on the IRGC in Ahvaz on September 22. The attack is a major near escalation and shows Iran’s reach throughout the region. It also shows that Iran is willing to strike wherever it wants in Syria and Iraq and knows that air defense systems in Iraq and those by the Coalition in eastern Syria will likely not be activated. However this leaves questions as to whether Tehran informed both the Syrian regime and Baghdad of its plans.

Iranian media announced in the morning of October 1 that the IRGC’s Aerospace Force had fired the missiles at 2am on Monday. The missiles flew 570 km, crossing from Kermanshah in Iran over northern Iraq and into Syria where Tehran says they struck an areas east of the Euphrates near Al-Bukamal. Al-Bukamal is one of the only areas in Syria still held by Islamic State. IRGC members painted “death to America,” “Death to Israel,” and “Death to al-Saud,” a reference to Saudi Arabia, on the missiles. 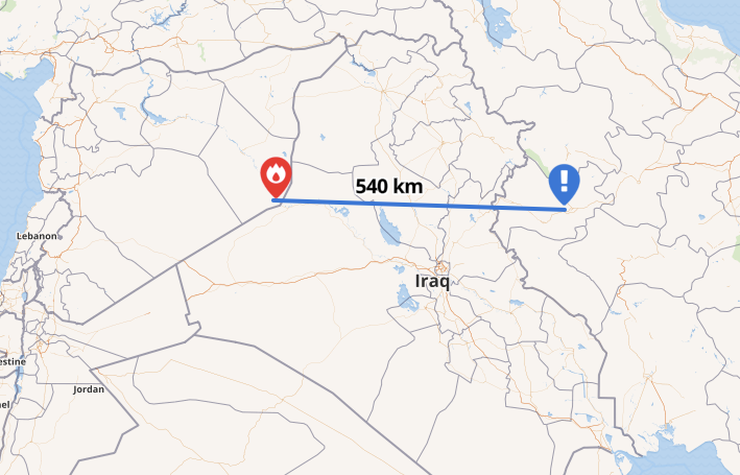 Video released by Iran showed the missiles reaching skyward in the dead of night. The regime scripted the bombardment as it had with the previous attack on the Kurdish region in early September.

The launch comes after Iran had blamed Washington and Riyadh for the Ahvaz attack, claiming that they support groups in southwest Iran who oppose the regime. The attack was initially claimed by a local Arab group but later ISIS took responsibility. Iran’s statement on October 1 left it unclear who was targeted in Al-Bukamal in Syria by the attack. Tehran fingered “Takfiri terrorists” which likely means ISIS, but could refer to other groups. The US-led Coalition and its SDF partners are operating in the Euphrates valley attempting to defeat the last ISIS pocket near the area the IRGC targeted.

Iran’s Fars News points out that these missiles represent a new achievement for Tehran. They included “new technical features.” The IRGC chose the Zulfiqar and Qiam-1 ballistic missiles to target Syria. The Zulfiqar and Qiam had been used last year in June to target ISIS in Deir Ez Zor. According to some accounts online one or two of the Qiam missiles crashed soon after launch. Video online alleged to show fires caused by the misfired missiles. During the Fateh 110 attack in early September at least one of the missiles also veered off route.

To fire the missiles over Iraqi airspace Iran should have coordinated with Baghdad. The use of Iraqi airspace twice by Iranian ballistic missiles points to this coordination. However it does not appear that Baghdad warned air traffic of the missile firings because major carriers were traversing Iraqi skies during the launch. The US Coalition operating in Iraq and Syria should also have been notified via Baghdad, but they received “no notice,” Coalition spokesman Col. Sean Ryan wrote in an email.

“Iranian forces did conduct no notice strikes last night and we see open source reports stating they were targeting militants it blamed for the recent attack on an Iranian military parade in the Middle Euphrates River Valley. At this time, the Coalition is still assessing if any damage occurred and no Coalition forces were in danger,” The Operation Inherent Resolve spokesman said.

According to data at FlightRadar24 one flight from Moscow to Damascus did appear to detour during the time of the missile launch. Syrian Air 442 (RB442) changed course north of Kermanshah and then flew over Iraq towards Damascus. 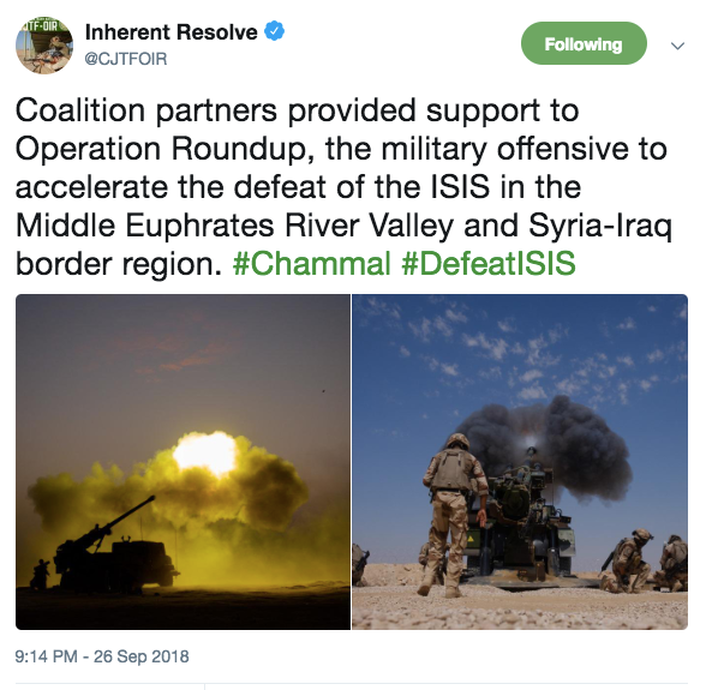 The target of the missiles in the eastern Euphrates area would have been close to US forces and their Syrian Democratic Forces partners. This would have posed a threat. An inquiry to the US-led Coalition has not been answered as of time of publication.

The targeting of ISIS in Syria by Iran is a major escalation primarily because the missiles overflew both Iraq and landed near Coalition forces. Iran is an ally of Syria and Iran has warm relations with Baghdad. This shows how Tehran’s arc of influence stretches across these states and how the IRGC does not see these states as having borders but rather being an area the IRGC is free to operate in.

The ballistic missile strike comes in the wake of Iran’s claims at the United Nations General Assembly that the US is isolated and that Iran is the responsible player working with the international community. Iranian Foreign Minister Javad Zarif said the US administration was engaged in “destructive unilateralism” and that the US was a “rogue administration” with a “commitment to destabilizing the international system.” However the IRGC has exploited instability in the Middle East in order to fire its ballistic missiles over Iraq and into Syria. It received little pushback after targeting Kurdish groups in northern Iraq in early September and it expects to receive no pushback this time. The international community would find it difficult to condemn the missile strike since it was targeting ISIS which the international community is also fighting. But the slogans “death to America,” “death to Israel” and “death to al-Saud” point to a goal that is not just targeting ISIS. That air traffic over Iraq was not warned points to reckless behavior by the IRGC.

This is the larger message of the ballistic missile strike directed at Israel, the US or Saudi Arabia. It is practicing by using its missiles on ISIS and Kurdish opposition groups.