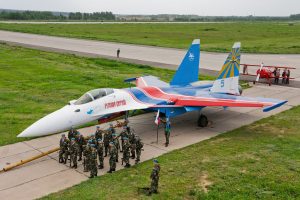 The Kremlin increased military spending in 2016 to become the 3rd largest spender, despite a lagging economy due to Western sanctions and the collapse of the price of crude oil on global markets. Military expeditures rose for the second consecutive year to over $69 billion. The Stockholm International Peace Research Institute (SIPRI) stated that Russia increase money spent on weapons and personel by 5.9%

“This increased spending and heavy burden on the economy comes at a time when the Russian economy is in serious trouble due to low oil and gas prices and the economic sanctions imposed since 2014,” (by the West over the Ukraine conflict), SIPRI said. reported AFP.

“This is despite the fact that Russia’s spending in 2016 was only 27 per cent of the combined total of European NATO members,” said Aude Fleurant, Director of the SIPRI Arms and Military Expenditure (AMEX) program.

Russia has also faced pressure from its population on the extent of military outlays as social spending has declined and impacted healthcare, education, pensions, etc. The recent corruption allegations against Prime Minister Medvedev have also heightened tensions over the federal budget and corruption.