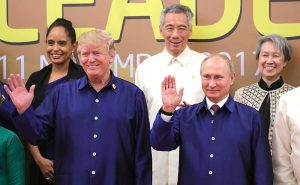 A summit between Russian President Vladimir Putin and American President Donald Trump seems to be in the cards this summer, declared Richard Hooker, Special Assistant to the President and Senior Director for Europe and Russia in US National Security Council.

According to him, Austria is considered as one of possible venues for the summit. “I am sure this is an option under consideration, but no decision has been made,” he said.

On June 10, Putin confirmed that he was ready to meet with Trump as soon as the US was ready for it, reported TASS.

Asked whether he was planning to meet with Putin this summer, Trump said it was possible.

Bank Of Russia Reduces Interest Rates As Inflation Under Control