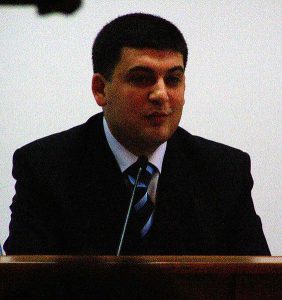 The government of Ukraine is going through convulsions over the long-time-delayed, forced approval of the anti-corruption court demanded by the IMF and other international aid organizations for further release of funds. Vested interests in keeping the old, Soviet-styled, oligarchic system of corrupt governance are fighting hard against this additional layer of legal reform.

The bill to create an anticorruption court was approved in its first reading on March 1, and President Petro Poroshenko said it should win final approval before spring ends, reported RFERL.

The IMF has called the establishment of an anticorruption court a “benchmark” of Ukraine’s progress toward Western legal standards, and has said it would help ease the release of its loans in the future.

Ukrainian Prime Minister Volodymyr Hroysman has declared he will resign if the court is not approved tomorrow in Ukraine’s parliament. Many analysts see this as grandstanding.

“As Ukraine’s prime minister I have made a decision: If such a just and independent [anticorruption] court is not formed, I will step down from the post of the prime minister of Ukraine, I will resign,” Hroysman said.

“We agree with the IMF that any legislation establishing an anti-corruption court must include a central role for a council of international experts to ensure the selection of qualified judges,” U.S. State Department spokeswoman Heather Nauert said in a statement, adding that Ukraine should discuss its proposals directly with the IMF, reported Reuters.

In further drama, Prime Minister Hroysman has announced that he wants to sack his Finance Minister Oleksandr Danylyuk, who is known for his anti-corruption efforts. Hroysman wrote on Facebook on June 6 that he had submitted a motion to parliament for Danylyuk’s dismissal, whom he accused of spreading “distorted information amid our international partners,” reported RFERL.

“I had faced colossal pressure over the past year…. I was given a choice — either leave or become an accomplice…. I will not sell out my country,” Danylyuk wrote, adding that he wanted to address lawmakers.

The plot thickens and the world waits for the vote tomorrow.