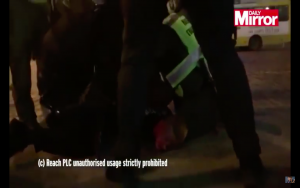 It was no secret that Russian football ‘fight clubs’ had been training and itching for a fight with English supporters in the upcoming football matches of the Champion’s League Final and the World Cup. There has been plenty of press about the phenomenon, and accusations of support from oligarchs and government sources within Russia. The incident in Marseille in 2016 where many were seriously injured stands out in recent memory as an example.

The video below shows a recent incident in Kyiv as a mob of Russian fans attacked Liverpool fans eating at a restaurant near the stadium in Kyiv. “The Mirror revealed how the British fans had to use tables inside the Rooster restaurant as shields after the hooded hooligans stormed the doors. As the travelling fans fled in fear, the chasing mob pelted them with bottles, glasses and chairs – causing dozens of shocking injuries.

“Jason Frost, 50, from Nuneaton, was targeted just hours after arriving in Kiev for the big game.

“He said: “We’ve been here for four hours and then we’re getting attacked. They came at us like a pack of dogs. It was terrifying,” wrote The Mirror.