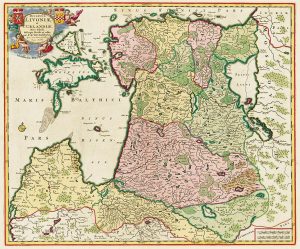 The Baltic states have been stereotyped as the Wild West of money laundering. Tales from Latvia of dirty money getting cleaned are legendary. The Baltic moniker was given more credibility today as financial police in Estonia declared that at least $13 billion were washed through the country’s banking system since 2012.

“The European Union member country has been rocked by revelations of money laundering from Russia, Moldova and Azerbaijan via non-resident bank accounts that have forced lenders in Estonia and neighboring Latvia to shut down. Estonia’s police Financial Intelligence Unit (FIU) said that besides more than $6 billion laundered via Estonian banks in schemes discovered by national financial inspection agencies, a further unreported 7.3 billion euros was channelled via Estonian banks through the sale of Russian stocks and bonds,” reported Reuters.

“In 2012, more than 7.3 billion euros in securities from Russia were processed through the Estonian financial system. The proceeds were transferred to dozens of jurisdictions and thousands of companies for various goods and services,” Estonia’s Financial Intelligence Unit (FIU) said in its annual report.

The phenomenon seems to be tied to the closure of banks in the Russian financial system due to insolvency. Non-resident accounts were primarily used in the schemes through the sale of Russian stocks and bonds. Western financial sanctions have increasingly targeted Russian wealth offshore as a way to influence the inner circle of Vladimir Putin.

Authorities in the United Kingdom have begun requiring wealth brought into the British financial system from Russia to be declared and the source of funds identified. Russian oligarchs are also starting to face pressure on renewing visas due to increased focus on Russian expats in the Uk after the poisoning of Sergei Skripal and his daughter with with a military nerve agent.

Macedonian PM Pledges To Forge Ahead On Name Change, Despite Referendum Failure On Turnout

A Quote For Today’s World By Fyodor Dostoyevsky