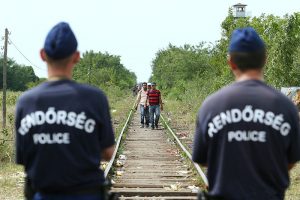 The leaders of the Central European nations of Poland and Hungary declared today in a joint news conference that only their sovereign governments will decide who enters their respective countries, not bureaucrats and politicians in Brussels. The prime minister of Poland, Mateusz Morawiecki, and the prime minster of Hungary, Viktor Orban, stood shoulder to shoulder and made it clear the two nations would help the migrants stay in or near their own countries, and provide aid, but would not open the borders to thousands of Islamic nationals in order to protect Central Europe’s culture and security, rejecting the quota system dictated from Brussels.

“Here in Poland, it’s we who decide who will come to Poland and who will not.

Declaring the two nations would provide aid where the migrants are, Orban stated, “We also have hearts, we do not have stones instead of hearts. We are a Christian people.

“We know what commitments are, what it means to help.

“But we cannot help anyone if we destroy our country in the meantime,” reported Express.

After initially accepting some migrants in 2015, Central Europe has closed its borders and built walls to keep out the flood of migrants coming from North Africa and the Middle East. Orban and Morawiecki believe that providing aid and humane assistance in neighboring countries or directly to the war-torn areas is a better method of dealing with the crisis. The two leaders also believe that most of the migrants are moving for economic reasons and not persecution, therefore, closing the open borders is important to keep from luring additional people.