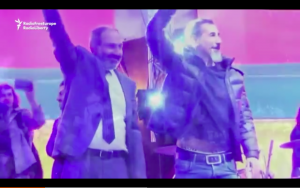 Tens of thousands of people have attended a mass rally called by Armenian opposition leader Nikol Pashinian in Yerevan aimed at showing his popular support on the eve of a parliamentary vote on whether he should be prime minister.

As he took to the stage at the beginning of the rally on Yerevan’s central Republic Square, Pashinian was joined by Armenian-American rock star and activist Serj Tankian, who is the lead singer of the alternative-metal band System of a Down.

Tankian, who has offered his support for Pashinian’s protest movement, addressed the cheering crowds in Armenian. “You managed to turn your anger and despair into a positive movement,” he told the crowd…