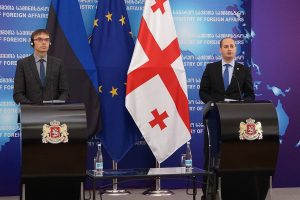 Estonian Foreign Minister Sven Mikser didn’t take kindly to European Commission President Jean-Claude Juncker’s comments regarding how we all should just get along with ‘his friend’ Vladimir Putin, and restart dialogue.

Juncker made waves while giving an interview to the Dutch media outlet Trouw over the weekend, where he commented that Putin was ‘his friend’ and that there can be no security agenda in Europe without Russia, and that communication with the Kremlin needs to be reestablished.

Estonia has been locked in a hybrid warfare contest with Moscow for years as the Putin regime attempts to pull the Baltics back into the Kremlin’s sphere of influence.

“The strength of the European Union lies in respecting democracy, the rule of law and fundamental freedoms. The fact that the leaders of today’s Russia do not share the same basic values definitely sets limits to how Europe can communicate with the Kremlin…Only when the leaders of Russia start to follow the generally accepted principles of international law can we start to speak about communication ‘on an equal footing’,” declared Mikser, reported The Baltic Times.

“Europe must speak with Russia strongly, uniformly and from a position of principle, while we must speak about Russia honestly and without excessive wishful thinking. I agree with Juncker’s acknowledgement that Russia plays a significant role in Europe’s security, but this role today is regrettably predominantly negative,” Mikser added.

NATO has permanently stations several brigades of rotating troops in the Baltics and Poland to provide a tripwire to any possible Russian aggression in the region at the request of the Baltic states.