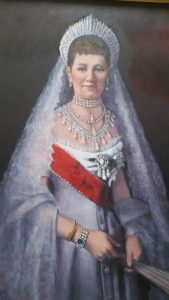 Barbara Kur Green and her husband, Francis Eugene (F.E.) Green, have been associated with Froebel Gallery (known first as Grupo Arte, Madrid-Albany) since its inception in Albany, New York in 1991. The gallery director and author of Anastasia Again: The Hidden Mystery of the Romanovs (until December 2018 available exclusively at tsarizm.com), J (Johannes) Froebel-Parker, commissioned Barbara to create a formal portrait of Grand Duchess Anastasia Romanov as an adult in traditional Russian Imperial court costume. The author and interviewer visited the artist in Catskill, New York to discuss the project and its genesis.

Barbara was born in Brooklyn, New York 1942 and began drawing from the time she was a child, essentially focusing on portraits. She has always been fascinated by faces and people. From Mike Tyson in the Catskill, NY gym in which he trained, to studies of the victims of the Holocaust, to ballet dancers, she has always tried to find more than the physical likeness of a model or subject, namely the “mystery” of each person. Each painting or drawing deals with a unique mystery which affects the external nature which can be revealed. She graduated 1960 from Erasmus Hall High School in the same class as Barbra Streisand and Bobby Fisher. Green attended New York University from 1960-1964 where she attained a B.S. in Art Education; she studied at Arts Students’ League on 57th Street, New York, then at the National Academy of Art (New York City) after which she graduated with an MFA from Instituto Allende in San Miguel de Allende, Mexico. Barbara studied with Moses Sawyer, Robert Beverly Hale, and her then future husband, F.E. Green. Her work is included in the Boxing Hall of Fame in Canastota, New York and was featured on HBO in a special about Mike Tyson. Her portraits are held in the Jewish Museum of Religion at Hebrew Union College (New York City), while her catalogues are included in the Metropolitan Museum of Art archives. Mrs. Mario (Matilda) Cuomo, then first lady of New York State, visited Froebel Gallery in Albany, New York with students she mentoring to view Barbara’s Holocaust themed exhibition- Der Zirkus Beginnt (The Circus Begins).

Green and Froebel-Parker discussed the painter’s artistic journey with the personage of Grand Duchess Anastasia Nicholaevna Romanov of Russia and the lady known as “Evgenia Smetisko,” the theme of Froebel-Parker’s newest book, ANASTASIA AGAIN: The Hidden Secret of the Romanovs.

JFP: What preconceived notions did you have about Anastasia Romanov before you accepted this commission?
BKG: I was more aware of the Ingrid Bergman portrayal in her famous film about the subject not knowing really that there had been other pretenders to the same legacy. The fact that another woman, namely the one known as “Evgenia Smetisko,” had maintained that she was the youngest daughter of the Tsar and Empress was completely unknown to me before accepting this commission.

JFP: What about the possibility that Anastasia had survived the execution of her family during the night of July 16/17 1917 in the so-called “House of Special Purpose,” the Ipatiev House in Yekaterinburg, Russia? Had you ever considered it?

BKG: Initially I was skeptical about that. How could anyone have survived such an assault? Why would Anastasia be the only one to survive and not any of the others? Anyone would naturally have some level of skepticism about such a purported miracle. During the Holocaust, however, there were people lined up for a firing squad after which a survivor might climb out of the pit alive defying all odds. In the course of research for my Holocaust series I read about a number of such miraculous survivals. There is historical precedence for survival in defiance of all probability, in defiance of fate.

JFP: The lady known as Evgenia Smetisko who claimed she was Anastasia Romanov was never given the honor of being called a grand duchess in adult life, yet her claim is now gaining increasing plausibility. When asked if you would accept the commission of painting her as a Russian noblewoman, what did you think?

BKG: I sincerely felt that this was a way of giving the woman her true recognition, her merited place in the world. It was the chance to visualize who she really was but in life never had the chance to be. In order to preserve her safety she never could have lived truly openly with that identification. My previous work with the subject matter of the “conversos” also called “marranos” of Spain (Jews who were ostensibly Catholic while maintaining their original identity in secret during the Inquisition) illustrates historical examples of how people can be one thing and simultaneously appear to be another. During the Nazi era we witnessed Jewish children who were brought up to believe they were Catholic by parents who knew that this alternative reality could save their lives.

JFP: Imperial Russian court costume is relatively easy to research as there are many examples in museums, photos, and paintings. Creating the face of a middle aged subject is a much more daunting task especially if that person was thought by most to have died as a teenager. How did you approach that challenge?

BFK: There are many images of the historical Anastasia as a young girl and teenager up until the time of the Romanov execution. Life Magazine of October 18, 1963 provided photos of the lady known as Evgenia Smetisko, who would then have been in her early sixties. The facial recognition overlays and side by side analyses of the historical Anastasia Nicholaevna Romanov and the older lady who lived under the name Evgenia were compelling. Bob Schmitt’s software (www.visualfacerecognition.com) facilitated the production of many such studies completed by Mr. Schmitt and the author of Anastasia Again. The plethora of convincing 2D and 3D images helped to assure me as an artist that the lady had indeed been Anastasia. I was thus able to reference the final image of Anastasia as a mature woman. I studied the bone structure, the eyes, other facial features, even the coloring, to create a face using these visual clues. As I always look for the essence of my subjects, I delved into ANASTASIA AGAIN to learn more about the protagonist’s life, suffering, purported rescue and escape. As Anastasia had been an artist in her own right I found in her a kindred spirit, a sense that she and I were relating to one another through our medium of art.

JFP: Your own family was involved in the upheaval caused by the overthrow of the Tsarist Government in Russia:
BKG: Yes, my dear father and his family were also sent into exile to Siberia during the Bolshevik Revolution. They were considered “bourgeoisie,” which sealed their fate. From there my grandmother somehow managed to transport them all to Harbin, China thence to Japan to Canada and finally to the USA. I can relate to aka “Evgenia’s” account of forced migration, not one of her own volition, and how she ultimately could have survived, as my own family had persevered through similar circumstances. At Hebrew University College I created an exhibit of realia and memorabilia from my family’s exodus from Bolshevik Russia into freedom in the USA.

JFP: What did you enjoy most about the intricate portrait you created of Grand Duchess Anastasia?

BKG: Well, I learned how to paint pearls which is no easy task. The most interesting challenge was to make Anastasia accessible to a public who never knew her as an adult, to give her honor, to bring her out of the shadows in which she had lived so much of her life in defiance of fate!