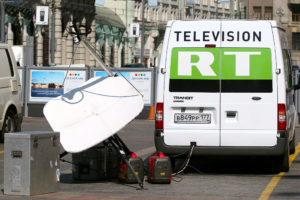 The Russian Federal Service for Supervision in the Sphere of Telecom, Information Technologies, and Mass Communications (Roskomnadzor) threatened today to take measures against American media companies operating in Russia if pressure on the Russian television channel, RT, continued. Director Alexander Zharov said ways would be found to retaliate for the perceived, continued interference in the outlet’s operations. RT complained that Facebook temporarily blocked RT’s page during the Trump inauguration.

“RT has been blocked from posting content to its Facebook page. The ban, according to the Facebook bot, will last until Saturday 10:55pm Moscow time (2:55pm EST) and will extend across US president-elect Donald Trump’s inauguration,” reported RT.

“If you watch the actions the U.S. media and social networks are taking against the Russian channel, we just don’t see any reasons for them,” he went on. “If there are clear indications of restrictions on RT’s absolutely legitimate operations in the U.S., we’ll mull the situation over then.”