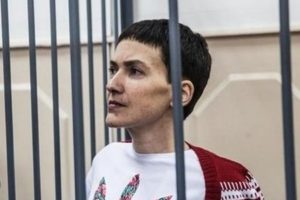 Nadia Savchenko, Ukraine’s MP and former Air Force pilot, has caused controversy with a suggestion that Ukraine should give up the Crimea in exchange for Russia leaving the Donbass region.

On Tuesday, Savchenko stressed that the situation in the east of Ukraine can only be resolved peacefully.

According to the former pilot and prisoner of war, if Ukraine somehow returns Crimea to Ukraine, Russia will formally annex territory in the Donbass. Savchenkos’ suggestion caused harsh criticism from politicians and Ukrainian society.

“We will not exchange Crimea for the Donbass, and we will not give up the Donbass either. We will claw back every meter of Ukrainian land,” said Iryna Herashchenko, first deputy speaker of Ukraine’s parliament.

Savchenko worsened the situation when today, while answering on the accusation she said the following:

“I never said one should give up on Crimea. It is already lost. I don’t want people to be misinformed: those telling you it is still ours…they lost it back in 2014,” she said.

Later on Wednesday, Russian Presidential Spokesman Dmitry Peskov said that the ownership of the Crimea is “not a topic for discussion.”

“Russia does not discuss the status and future position of Russian regions,” Dmitry Peskov said to Ria Novosti.

Savchenko went from national hero to one of the main targets of criticism from the pro-government politicians. She fell into dispute with Ukraine’s ruling circle after her trips to the self-proclaimed unrecognized Donetsk and Lugansk republics. Her actions and commentary has received criticism since then. She is already excluded from the delegation of Verkhovna Rada and now authorities are excluding her from the parliamentary Committee On National Security And Defense.