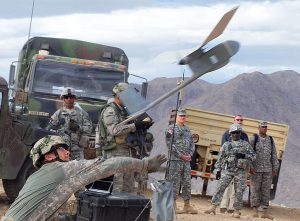 Russia has begun jamming U.S. drone GPS signals in the Syrian theater in response to possible American military action against the Assad regime for alleged use of chemical weapons against civilians.

“The Russians began jamming some smaller U.S. drones several weeks ago, the officials said, after a series of suspected chemical weapons attacks on civilians in rebel-held eastern Ghouta. The Russian military was concerned the U.S. military would retaliate for the attacks and began jamming the GPS systems of drones operating in the area, the officials explained,” reported NBC News.

The jamming is reported to have impacted U.S. military operations in the area; however, the technique is only affecting smaller UAVs and not larger Predator type drones. Russia has invested heavily in electronic warfare and other asymmetric techniques to deal with overwhelming American technology and firepower.

#Russia's state TV host says: "The U.S. won't be able to conduct strikes with impunity, unlike the last time. Pentagon is experiencing serious problems with orientation." Both hosts look at each other and nod, then show the Fox News clip about Russia jamming U.S. drones in Syria. pic.twitter.com/XIF8ZxeBs9