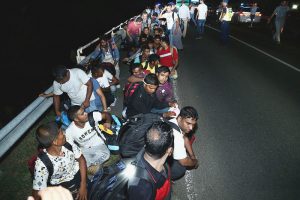 Hungarian Prime Minister Viktor Orban, in his annual state of the union address, called Christianity Europe’s last hope and warned that Europe is in danger of falling to an Islamic invasion.

“Dark clouds are gathering over Europe because of immigration…Nations will cease to exist, the West will fall, while Europe won’t even realise that it has been invaded…Christianity is Europe’s last hope against rising “Islamisation” taking place on the continent.

“Absurd as it may sound, the danger we face comes from the West, from politicians in Brussels, Berlin and Paris…liberal politicians who “opened the way for the decline of Christian culture” in Europe are determined “to force Hungary to adopt their policies that have made them immigrant countries”.

“Born Germans are being forced back from most large German cities, as migrants always occupy big cities first…If hundreds of millions of young people are allowed to move north, there will be enormous pressure on Europe. If all this continues, in the big cities of Europe there will be a Muslim majority.

“Hungary will only express solidarity with Western European leaders who want to rescue their country and its Christian culture…We are not alone…We will fight together to stop Soros’s plan in Brussels and the United Nations.

.@idc_cdi is important because the search for identity is in the centre of political debate everywhere in the world, especially in Europe where migration has further intensified the issue – #Hungary PM #Orban at #IDCCDIBudapest.https://t.co/OsqlbpuBq3

“If we have enough allies – and we can have enough allies – then I am sure we’ll succeed…We will not remain silent and watch the execution of the Soros Plan: if need be, we will make use of stronger legal tools…If they do not stop their dangerous activities, we will simply expel them from the land, no matter how powerful or rich they may be.

“Soros has antagonised not only us but also England, President Trump and Israel too…Everywhere he wants to get migration accepted. It won’t work. We are not alone and we will fight together … and we will succeed.

“We Hungarians have a future only if we remain Hungarians, if we cultivate our language, protect our Christian and Hungarian culture, and if we guard our independence and Hungarian freedom.”