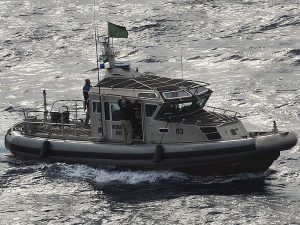 Artan Hoxha is an Albanian investigative journalist who for 19 years addressed drug and other clan issues, met informants, police, politicians, and businessmen. During this risky career he has been kidnapped, persecuted, blackmailed and insulted, putting his life in danger on many occasions through his TV investigative program on News24, “The Jungle”. Most of the topics he addresses are considered taboo here in Albania, especially Mafia issues.

In a recent interview with the German magazine “Stern”, he confessed that he received the last blackmail only a few hours before the interview. He says: “We (journalists) have to deal with the most “successful” products of the Albanian export – drugs and violence. In bad days, I find myself talking to my assassins, Mafia people, asking them how they are going to execute me. I would have liked by Kalashnikov or a bomb planted in my car, something quick. I always face the door when I sit somewhere….if the assassins arrive, I may have a few seconds to escape.”
Artan Hoxha is not paranoid but all this has not stopped him from investigating. There are many opinions regarding his survival so far. Some say he is part of the Mafia himself; others that he is protected by CIA. But he says, “The more I am judged, the more possibility I have to survive”.

In his article in “Stern”, the German writer, Jonas Breng, makes a thorough analysis of the drug Mafia in Albania and Europe. He says Artan Hoxha is successful in his investigations as he receives factual information from the public, providing him proof on the drug business. People trust him more than state officials; they call him the Robin Hood of Albania.

According to Hoxha, there are three main reasons favouring the establishment of drug Mafia in Albania:
• Clan structures
• Geographical position
• Politics

“Albania is like a greenhouse, with a good climate in which the illicit plants bloom”, he says.

The Albanian journalist has investigated many important Mafia issues, like places where cannabis is transported, money laundering, corruption, whacking events, the shooting and murder of four unarmed demonstrators during the 21 January 2013 opposition protest, or the murder of the banker Santo, who was involved in oil Mafia, in June 2014 whose assassins, according to Hoxha, were also executed by the same people who ordered his death. He also provides an example of one of his informants, who was kidnapped and executed two months after an investigation.

Hoxha has been investigating the 2 million euro that were transferred from Panama to Albania, but remain suspicious. Due to major interference, its investigation was closed. He has also investigated the case of the “Pablo Escobar” of Albania, Klement Balili, the boss of drugs, who is still free. All efforts to catch him have failed. Hoxha states that he has strong connections with politicians and the police, which try to silence his issue. “My job is to remind them of that”, he says, providing evidence that he travels like a tourist within the country, at a time when the authorities here and abroad are looking for him.

The Albanian journalist has been sent to the Prosecution Office several times for revealing investigation secrets, like the case of the Italian drug plane that landed in Ishem near Tirana a couple of years ago. Although he has provided feedback to the police and Prosecution Office on all current Mafia issues, no one has seriously lent an ear to his investigations.

The “Stern” journalist gives a clear panorama on how Albanian drug clans operate in Germany and elsewhere. Through his inquiries, he maintains that the Albanian drug cartels are among the most powerful in Europe. They have been trying to get control of the drug trade in Germany for years now, leaving behind Russians and Turkish drug dealers.

According to him, Albanians have the advantage as they are born not to talk. They are not ordinary groups of violent people, but units with brutal organization and vertical hierarchy. They are faithful people, ready to pay any price, even death. Discipline is their key. Cartels pay salaries even to their families in Albania.

Albania takes first place for producing marijuana. There are 20 big clan families in the country. Albanian clans are smaller than in the Italian Mafia, Cosa Nostra, or Ndragheta. Politics is closely linked with drug cartels and the judicial system is corrupt. In 2016, there were 1349 drug dealers arrested, but only 100 were sent to prison.

With the ongoing negotiations for possible EU membership, the Albanian government is bound to being officially committed to the war with drugs, pretending the situation is under control.