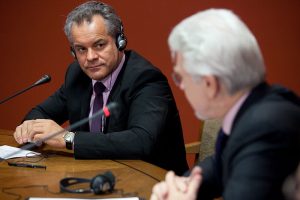 The Moldovan government in Chisinau recently recalled its ambassador from Russia in response to harassment and intimidation by Russian authorities of Moldovan politicians and officials, the Moldovan foreign ministry said on Monday, reported Reuters.

Tensions have been high over the last several years following the theft of 20% of the Moldovan treasury which the Moldovan government blames on Russian security services. Russia was also implicated in a massive ‘Russian Laundromat’ scheme where large amounts of cash were laundered through Moldova to offshore locations.

Moldovan officials complained of harassment in Moscow and Chisinau banned its diplomats from traveling to the Russian Federation. Diplomats on both sides were declared ‘persona non grata’ over the summer. Moldova also banned Russian flights over its airspace to the Transdnister frozen conflict.

the Moldovan Foreign Ministry said in a statement on its website: “We will look for ways to overcome the current situation so that in the future such actions are avoided, which can spoil Moldovan-Russian relations, which the Moldovan side wants to be friendly, trusting and based on respect for each other,” reported Reuters.