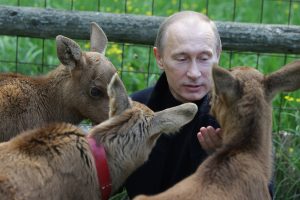 Russian President Vladimir Putin announced today that he will run for a fourth term as leader of the Russian Federation. It has been obvious the Kremlin was active in preparing the ground work for this announcement as opposition candidates have been marginalized, the military conflict in Syria has ended, and Putin has floated trial balloons regarding making peace in East Ukraine.

“Putin is practically guaranteed to win. A September poll by the independent Levada Center put his approval ratings at 83 percent,” reported The Moscow Times.

“I will nominate my candidacy for the position of president of the Russian presidency,” the Interfax news agency cited Putin as saying during an event in honor of the 85th anniversary of the Gorky Automobile Factory in Nizhny Novgorod.

“There’s probably no better occasion or place to make such an announcement [as this.]”