Albania is a self-proclaimed secular state that allows freedom of religion. There are 3 main religions: Islam, Orthodox Christianity and Catholic Christianity. There is also Bektashism, a more tolerant branch of Islam.
The percentage of Muslims remains the majority at more than 65%, including Sunni Islam and members of the Bektashi school (Shi’a Sufism). More than 20% of the population are Orthodox and about 10% are Catholic.

Geographically, most Muslims are found in the center of the country, with a few in the north and a part of south is Bektashi. The south and southeast are mainly Orthodox, while a part of northwest and northeast are Catholic. There is also a Greek Orthodox minority in the south. Today, the Albanian religious panorama has expanded with Baha’is, Evangelical Christians, Jehovah’s Witnesses and Mormons.

1. Christianity began to spread in ancient Illyria since the beginning of AD; documents show that in the year 58, in the city of Durrës, there were 60 Christian families. 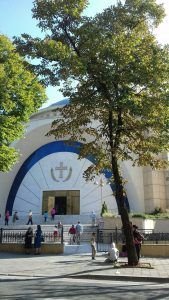 The first Christian centers, established by the Apostles and their supporters from the 1st – 4th century (when Christianity became official religion) are proof of the birth of Christianity in Albania, and can be seen in Durres, Butrint, Orikum in Vlora, Apollonia in Fier, Amantia, Bylis (Ballsh), Antipatrea (Berat), Skampis (Elbasan), Scutari (Shkodra), Lyhnidi (Ohrid).

The mosaics and old church construction in these places preserve the old Christian evidence, considering that Illyria was originally one of the main areas of Christianity of ancient times, with 3 developed cities, Durres, Apollonia and Shkodra, having a very favorable geopolitical position to provide a corridor between east and west.

In the 4th century, Christianity was proclaimed the state religion by the Emperor Constantine the Great. Until the 8th century, the Illyrian church was directly under Roman influence.

Starting from the first half of the 8th century, year 731, Illyrian space was divided into areas loyal to the Patriarchate of Constantinople and areas loyal to Rome. The Mati River was the separation line between the two empires.

Meanwhile, the patriarch of Rome, called Papat (under French influence), continued to intensify the struggle to win many dioceses in Dalmatia and Arberia, until the Ottoman conquest and the spread of Islamism seriously damaged the Christian Catholic religion. 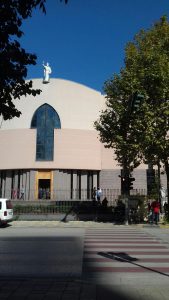 2. The contacts of Albanians with the Islamic world are relatively new compared to other countries. Islam appeared for the first time in the old continent at the end of the first millennium (9th-10th centuries). Historically, inter-religious contacts between Christian Albanians and Islamic propagators belong to the 13th -14th century. At that time, Islam spread violently, forcing Albanians to convert with violence; those who refused to convert were deprived of property rights and possessions, many Albanians migrated to the mountain, leaving everything behind. During the 15th and 16th centuries, important Islamic cultures (mosques) were established in the main cities of Albania. 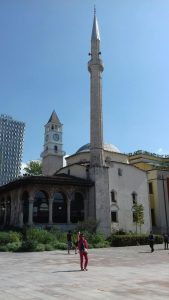 At that time, the only Christian country that did not pay anything to the Sultan was Arbëria (Albania). Gjergj Kastrioti-Skanderbeg, the son of Kruja prince, for 25 years he resisted the Ottoman armies, defending the Christian world with his deeds, receiving the gratitude of all of Europe. Skanderbeg stabilized a close relationship with the Pope, having clear goals for the protection of the holy church. After Skanderbeg’s death, the Sultan undertook a conversion campaign against Christians. Many were converted by changing the name only and continuing their Christian rites secretly.

It is to be noted that in the 15th and 16th centuries, unlike the eastern ritual, the Catholic Church encouraged the use of the Albanian language, thus helping in its preservation.

In the 18th -19th century, Islam had a religious and cultural boom in Albania.

3. The Orthodox Church was under the jurisdiction of the Turkish state during Ottoman invasion, which allowed other Balkan countries, like Greece, Bulgaria, Romania and Serbia Orthodox Churches to proclaim their autocephaly, acquiring this right since the 15th century. Albania did not have an independent Orthodox Church. Efforts for its establishment started in May 1907 overseas, in the USA, by a group of Albanian immigrants. Since they did not have a legal priest there, they decided to call him from Albania. He was Fan Noli, a great Albanian public figure, who gave his first mass on March 22, 1908. On April 12, 1937, the Albanian Orthodox Church officially recognized the direct dependence of the patriarch and proclaimed autocephalous.

4. Bektashism appeared in Albania at the end of the 12th and early 13th centuries. It originated from a mystical doctrine of Turkmen fathers of the XI-XII century in the Caspian Sea and was founded by Haxhi Bektashi. Because of the conflict with Muslimism, Bektashism gained religious tolerance with Christianity, with some points of attachment in religious life. They preached the equality of man with his wife, drank alcohol, and other things that were unpopular to Islam. From this tolerant position of Bektashism and the patriotic role played by many Bektashians, there have been opinions from local and foreign scholars and politicians throughout history that Bektashism would be an appropriate religion for the Albanians. In 1925, when Ataturk undertook state secular reform efforts for the creation of modern Turkey, Albania became the country of the Bektashi World Headquarters, remaining so today. 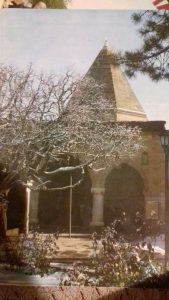 The 20th century and on

After the proclamation of Albanian Independence on 28 November 2012, more attention was paid to the country’s territorial preservation than religion. Despite great efforts and battles, half of the Albanian territory was divided among neighboring countries: Serbia, Montenegro, and Greece.

During King Zog’s rule, efforts were made to establish political stability in Albania, pursuing a neutral policy regarding the various beliefs in Albania, by separating power from religion.

During communist period, the regime tried to enforce an atheistic, secular state. In 1967, the government closed more than 2,100 mosques, churches, monasteries and masjids (small mosques for Bektashi). Many religious people were arrested or punished severely.

After 1990, churches and mosques were allowed to reopen. There have been new religious centers built all over Albania, even in the most remote parts of the country. All four major traditional communities have had substantial property claims that are being resolved with the passing of years. Lately, in Tirana, the Orthodox Cathedral has been constructed; the Great Mosque is also under construction.

Religious harmony remains one of the historical, cultural, and civilizational values of which Albania is proud to offer other Balkan peoples, representing a unique example for the rest of the world. Speaking a language of Indo-European origin, related to no other, Albanians were always forced to put their national identity ahead of religious affiliation. 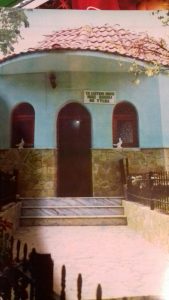 The best evidence of religious harmony in the social life of Albanians is historically demonstrated in the great holidays where Muslims and Christians have often gone to church and mosque together, weddings celebrated regardless of religious affiliation, coexistence in harmony and brotherhood. The best evidence of such harmony was also the presentation of four Albanian religious representatives, side by side, during the anti-terrorism manifestation for the victims of Charlie Hebdo in Paris, on 7 January 2015.

The 21st century is foreseen as a protagonist of great clashes, where peace and global security are under threat of terrorism. But Albanians have co-lived, fraternized and assisted each other, though with different beliefs.
Integration through such values ​​and coexistence makes Albanian European aspiration tangible.