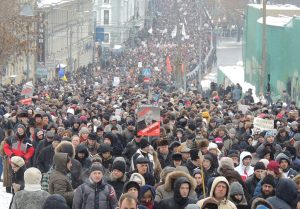 One quarter of Russians belief there will be mass protests ahead of the 2018 presidential election which has been formally set for March 18, according to a new poll by the independent Levada Center. Russian President Vladimir Putin has not formally declared himself to be a candidate as of yet, although he is expected to run.

“Twenty-six percent of those polled said there is a likelihood of mass protests against falling living standards or civil rights abuses. In a similar poll conducted in February, only 19 percent thought so. But only 14 percent of those questioned said they would personally take part in protests if they were to take place, in contrast with 80 percent who said they would not. The poll was carried out between Sept. 15 and Sept. 19 and questioned 1,600 Russians across 48 regions,” reports The Moscow Times.

The standard of living for the average Russian has declined considerably in the last few years after the Russian invasion of Crimea, the war in Donbass and Syria, accompanying Western sanctions and the collapse in oil prices on international markets.

Russia has slightly reduced the growth of military spending this year as a result. Spending on healthcare, education and other social services has been seriously curtailed.

The average monthly salary for an ordinary Russian is approximately $500, reduced almost by half since the crisis started.