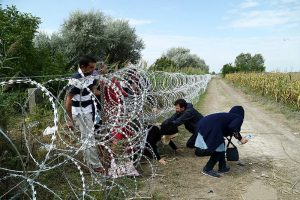 When the migration wave began from Northern Africa and the Middle East to Europe several years ago, Hungary realized early that the wave was not just refugees seeking shelter but an invasion which would forever alter the culture and security of Europe. As we see another wave of terror attacks in the United Kingdom, it is obvious Hungary was right.

The quickly designed and implemented barrier that now protects Hungary’s border from migrant flow has halted illegal immigration into the country by 99% since implemented in 2015. The United Nations really doesn’t like this fact.

“My fundamental impression is that there is a very clear intention here to limit severely the number of people that are allowed to come to Hungary to seek protection,” UN refugee chief Filippo Grandi said Tuesday, whilst visiting a transit zone for asylum seekers at the Hungary-Serbia border.

“When I was standing at the border fence today, I felt the entire system is designed to keep people, many of whom are fleeing war and persecution, out of the country,” he added, reported Breitbart.

Grandi said he understood the “complicated position” Hungary faces geographically, in that it lies “between the Balkans and Austria and Germany and countries that attract many asylum-seekers”.

However razor wire and fences “convey an impression of rejection which I believe should be changed”, said Grandi.

The Hungarian government spokesman disagreed with the U.N. position this week saying, “The distorted narrative that is spun from Brussels attempts to convince European citizens that somehow European solidarity should be connected to accepting migrants, many of whom have crossed illegally into the territory of the EU.”

On the second anniversary of the border wall being built in Hungary, Prime Minister Viktor Orbán’s Chief Security Advisor György Bakondi announced that the fences have caused illegal immigration to collapse from 391,000 in 2015, to 18,236 in 2016, to just 1,184 in 2017, reported Breitbart. “The system of technical barriers is the key to the success of border security, and without it, it would be impossible to stop the mass arrival of immigrants.”

“People who attack the fence are taking a stand in favour of allowing large numbers of people to enter the country without any form of control.” The walls were built in Hungary after the nation discovered the Paris 2015 terrorists passed through Hungary disguised as refugees.

Hungarian Prime Minister Orban also said this week that “the battle is only beginning” with the E.U. as the bloc attempts to force Eastern European nations to accept hundreds of thousands of migrants.

“Hungary is a European Union member, so the bloc’s treaties must be respected and the court’s rulings must be acknowledged…But this is not a reason to change an immigration policy that rejects migrants.

“The court’s ruling does not require Hungary to do anything…It is not us Hungarians who question the rules of the club, but the Commission had changed the rules and this is unacceptable,” Orban said.

The “real battle [against Brussels] is just beginning,” reported Al Jazeera. “The whole issue raises a very serious question of principles: whether we are an alliance of European free nations with the Commission representing our joint interests, or a European empire which has its centre in Brussels and which can issue orders.”

Could Siberian Nationalism Break Up Russia?