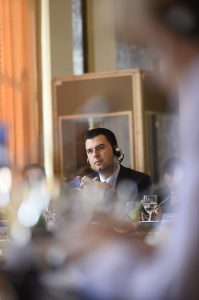 On July 22, the Democratic Party of Albania elected for the second time Lulzim Basha as DP leader with 53.931 votes. The other candidate, Eduard Selami, got only 5136 votes. 767 votes were worthless and 61 damaged.

In his victory speech, Basha stressed the fact that these elections show that Democrats are more united than ever. They lost governmental elections in June 2017, but not their confidence in DP, which will continue to remain more democratic.

The other candidate, Eduard Selami, supported by the DP opposition and some international entities, the US included, congratulated Basha for his win and said the contest was unfair, but he will still contribute to the DP establishment.

From the internal opposition among DP members, Xhozefina Topalli, the former Head of the Albanian Parliament, through a statement called a Basha Trojan Horse at the DP head, who tried to fill by himself the ballot boxes, as Democrats refused him on 25 June.

Astrit Patozi, another opponent, stated he hopes no fireworks are thrown to celebrate the
Basha election. He reminded democrats to not be surprised, if Lulzim Basha, the author of the greatest loss for DP in governmental elections, will call on democrats to unite, even those he dismissed during the June elections. Patois provided facts regarding voter fraud, where some people voted twice or more.

PUblic opinion, democrats included, have been expecting a change in DP leadership that would make DP a stronger party in opposition. In fact, everyone blames Basha for the famous loss during the 25 June political elections.

Poroshenko to Close Factories In Russia