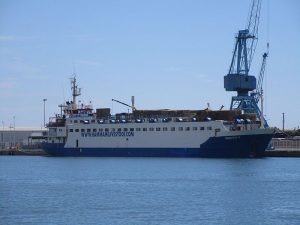 The Russian spy ship, Liman, collided with a livestock freighter in foggy conditions off the Turkish Coast in the Black Sea today and sank. All 78 crew members were rescued by Turkish sailors. The Youzarsif H was unharmed with slight damage to the bow. The collision tore a hole in the Russian ship below the waterline.

The Turkish Prime Minister Binali Yildirim called Russian Prime Minister Medvedev and expressed ‘sadness.’ The two nations have repaired relations since Turkey shot down a Russian fighter that had crossed its border from Syrian airspace. Russian President Vladimir Putin broke off economic connections between the two nations and at least publicly, their relations are now strong.

The two nations are now negotiating to end the Syrian conflict, although opposing agendas in the region still exist with each side supporting different sides in the civil war.

The collision Thursday occurred about 20 miles northwest of the Bosporus, one of the world’s busiest waterways, which connects the Black Sea to the shipping lanes leading to the Mediterranean, reported The Washington Post.

Russia Builds New Anti-Aircraft Base In The Arctic