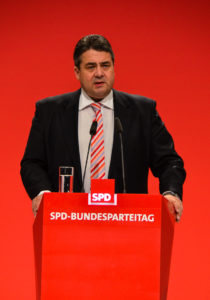 During a press conference with Minister Bushati and Prime Minister Rama, the German Foreign Minister, Sigmar Gabriel, who visited Albania on April 17 and met with both officials, stated clearly the German Federal Government’s stance to stop the parliamentary boycott by the opposition.

“We are very much concerned, when we conclude that the country is divided in two parts, where elected MPs, instead of working in parliament, boycott it. Let me tell you that this is not my personal opinion, but the attitude of the Federal Government, ” – Minister Gabriel stated.

He spoke harshly, as he talked about the lack of participation in parliamentary elections, and being surprised by the democrats’ decision regarding a technical government. He maintained, “If the opposition has any concerns about free and fair elections, there is a possibility; we are ready to help on how, for instance, the funding of election campaigns can be shaped. But this should be discussed in parliament and not in the tent. Close this boycott! Who boycotts parliament, damages the country’s interests and postpones country’s approach to the EU. The opposition should return to parliament, to implement justice reform, and to apply and conduct free and fair elections. If the country stays in a chaotic situation, you will not have our support; politics needs to focus on the interests of citizens, and their main interest is the continuance towards the EU”.

The message of the German Foreign Minister against the opposition the boycott is not the first to come from the Western Europe.

Earlier, even ambassadors and senior EU officials have asked Lulzim Basha, the leader of DP, to return to parliament, to vote for vetting, and to participate the June 18th elections. Lulzim Basha has considered part of these messages as sponsored by lobbyists, paid by cannabis money, but it seems that the stand of the German Foreign Minister has shown direct support for the government. The position of the German diplomat is strongly held against the Democratic Party. Sigmar Gabriel is one of Germany’s most vocal politicians, but also the most influential diplomat in the European Union. After these declarations, some media articles tried to diminish the importance of this statement.

The Democratic Party MP, Aldo Bumci, told Ora News television: “I maintain that the German minister was uninformed. This, due to the fact that he has been in this position only for a few weeks, after the former Foreign Minister left his post and elected as President, or maybe due to great the load of international issues he is bearing”.

By his reasoning, Bumci wanted to show that Gabriel did not mention at all the drug issue, together with the alarming situation that comes from domestic cannabis.

Meanwhile, the deadline for the CEC registration of political parties and their coalitions has expired. This has also brought a position on the law from Edi Rama and Ilir Meta, which on 19 April have asked the CEC to postpone the election deadline.

The CEC has not yet taken any decision to postpone the election deadline during their April 20 meeting; so, it seems to have quietly accepted the postponement until April 29, which has forced Lulzim Basha, the leader of DP, to stress that, if the CEC violates the law, DP will sue in court.