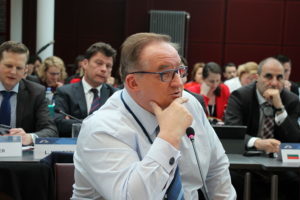 Poland has submitted an alternative to the Establishment favorite, Donald Tusk, to be selected as the head of the European Council. Jacek Saryusz-Wolski, is a MEP and and until Saturday a member of the Civic Platform (PO), the biggest opposition party to the ruling Law and Justice (PiS), reports Reuters.

For it’s part, the EU, wanted no discussion of Tusk being reappointed for a second term, saying even discussing an alternative would ’cause division’ inside the bloc.

Malta, which currently holds the 6 month rotating EU presidency, said, “It is a normal election process, everything will be decided in a democratic way.”

Poland, with other Eastern European countries, is trying to change from within the globalist agenda of the mainline, liberal European capitals. With nationalist movements strengthening in France, Italy, and elsewhere, the reappointment of Tusk is just the first battle in a long war to come.

Death Of Privacy: How Security Cameras Became A Plaything For Russian Hackers