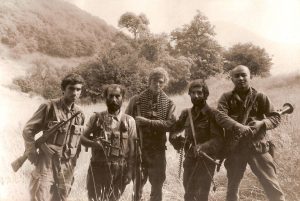 A day after being chosen Armenia’s new prime minister, Nikol Pashinian has called for the de facto authorities in Nagorno-Karabakh, a region in Azerbaijan under the control of ethnic Armenian forces, to become a party in the internationally mediated talks to resolve the long-standing conflict between Yerevan and Baku.

Pashinian, who was elected premier by the Armenian parliament on May 8 after leading street protests for weeks, made the call on May 9 in Nagorno-Karabakh’s capital, Stepanakert.

Armenian leaders traditionally visit the region on May 9, the date on which many ex-Soviet countries mark the defeat of Nazi Germany. It also coincides with the day Armenia-backed forces took control of a key town in 1992 during a war for control of Nagorno-Karabakh…