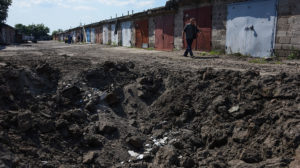 Ukraine’s central bank governor, Valeriia Gontareva, has said she may resign. There have been reports of her leaving her post but she publicly said it may be a possibility on Thursday at a press briefing in Kyiv.

When asked by reporters if the rumors were true, she answered, “That could be the case. But I repeat that the central bank makes announcements (of personnel changes) one month in advance. We have made no such announcement,” reported Reuters.

A coffin left at the bank’s doorstep recently with her head on it seems to have tipped the scales for her decision to depart the position. “Yesterday there was a coffin with my head in it at the main entrance of the central bank,” she said. “If the whole country sees that as normal, then that’s that.”

Gontavera has been instrumental in shepherding the bailout plan for Ukraine through the IMF and helping reform Ukraine’s financial system.

The central bank chief also warned of reduced growth due to nationalist blockades of Eastern Ukrainian coal in the Donbass region. Ukrainians angry at the government trading with the pro-Russian rebels in the East have stopped coal from Donetsk entering the market in pro-Western areas of the country controlled by the central government in Kyiv. “According to the most pessimistic scenario the continuation of the blockade to the end of the year could slow economic growth by 1.3 percentage points to 1.5 percent this year,” central bank chief Valeriia Gontareva said in a briefing, reported Reuters.

Gontavera’s role in stabilizing the banking system in the former Soviet territory has been instrumental in allowing Ukraine to receive continued aid from the West and international agencies. Corruption is still the main problem in the country and she has provided an oasis of common sense and steadfastness in Ukraine’s quest to rid itself of its corrupt, Soviet legacy.

At this time, Ukraine desperately needs to show it can continue to reform itself as the Trump administration figures out its policy towards Kyiv. Evidence that the battle against corruption is being lost will not help the government of Ukraine in its quest to continue Western assistance.