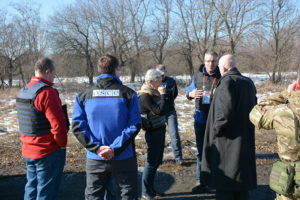 Monitors from the Organization for Security and Cooperation in Europe (OSCE) were fired upon while conducting a mission in Donbass, near the town of Yasynuvata, while inspecting a water treatment plant that was damaged by rebel forces. The OSCE team were surrounded, a drone was seized, and rifle fire was directed near them.

“We call on Russia and the separatist forces it backs to immediately observe the ceasefire, withdraw all heavy weapons, and allow full and unfettered access to the OSCE monitors.”

Mission chief Ertugrul Apakan said on Friday: “Firing at unarmed civilian monitors is not only a direct threat to the lives of brave men and women doing their best to bring peace to Ukraine.

“It is a direct challenge to the collective will of the 57 OSCE participating states, and to the Minsk agreements.”

World powers had negotiated a peace agreement in Minsk last year but both sides are now openly violating this agreement. Heavy weapons have been moved back to the front and violence is flaring, with casualties on both sides.

Clooney In Armenia For Genocide Anniversary