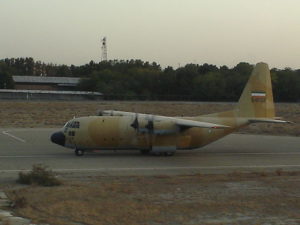 Russian aircraft will be using the Shahid Nojeh air base in Hamedan for as long as it is required, Iran’s Defense Minister Brigade General Hossein Dehghan said during a news conference on Saturday.

“For as long as they need,” he replied to a question for how long Russian aircraft will be using the base of the Iranian Air Force in Hamedan for strikes against terrorists in Syria.

According to Dehghan, Iran’s decision to allow the Russian Air Space Force to use the airdrome of the Shahid Nojeh air base in Hamedan is a part of cooperation in fighting the Islamic State terrorist group at request from the Syrian government.

“It is a military decision made in the framework of cooperation in fighting IS and other terrorist, which is organized at request from the Syrian government,” he said.

He also commented on criticism of the Russian aircraft’s presence in the country from the Iranian parliament: “Mejlis has nothing to do with this topic.”

While giving a reply to a question about the situation in Syria, the defense minister said IS was “in the throes.”

“Very soon, you will be able to see results of the anti-terrorist actions by Iran and Russia in Syria,” he told the reporters.

On Tuesday, Russian planes for the first time used the Iranian airdrome Hamadan to bomb terrorists in Syria.

Events In Crimea A Scene From The Twilight Zone

Putin Moves To Establish Military Base In Belarus