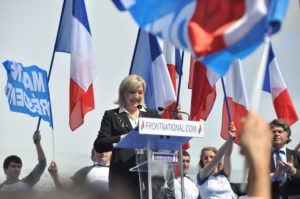 The French presidential candidate of the “National Front” party, Marine Le Pen, is kindly invited  to visit Crimea, [or the Slavic pronunciation, Krim], said the head of the Crimean parliament, Vladimir Konstantinov.

He noted that the reason for this step was the “clear and understandable” position of Le Pen about Crimea.

“She is one of the few politicians who understood exactly whole destiny and was not lazy to read the history of the Crimea, to understand it,” – said Konstantinov to Russian media agencies.

According to him, many Western politicians perceive the situation around Crimea wrong and do not bother to adequately understand the conflict.

Earlier, Le Pen told the newspaper “Izvestia” that in case of winning the election, France will recognize Crimea as part of Russia. She also promised to restore “normal” relations between Paris and Moscow, in particular, to abolish anti-Russian sanctions.

Russian Man Drinks Too Much, Declared Dead, Wakes Up In Morgue, Goes Back To Party