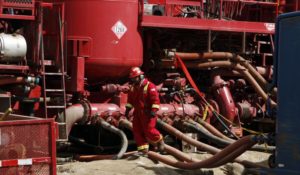 There were some happy campers in Moscow recently when the price of crude oil pushed past $50 a barrel.
The Kremlin seems to have successfully talked up the market by signaling it was ready for a production ceiling deal with OPEC. You could hear the collective sigh of relief from those controlling the Russian federal budget.

But that euphoria ebbed once again as American shale producers picked up the slack to boost production and reduce prices. Brent crude is now back down to the mid-$40s because of a supply glut of oil and natural gas.

The sustained low price of hydrocarbons is beginning to cause substantial pain in Russia: Last month, Moscow again dipped heavily into its reserve fund to plug a whopping hole in the budget. Officials can’t keep doing this. The rainy-day funds could be exhausted at some point in 2018.

The employment picture inside Russia is worsening as well. Companies are moving out of high-rent districts in Moscow to the suburbs, meaning workers face higher commuter fees in addition to all the other economic hardships. It’s an employers’ market. Workers can work for peanuts or find themselves without a job.
This is the reality facing the Kremlin over the next several years as American shale production seems to have changed the oil markets for good. Now that they’re built, these fracking wells clearly can be turned back on quickly with minimal cost. That provides for an instant injection into the markets whenever pricing becomes attractive. Restarting a conventional well is expensive and risky.

The Kremlin has made a bet that it can inject enormous funds into its military as a way to provide a safety valve for social unrest due to a worsening economy. If things get too bad, Russia can always get involved in another conflict, blame the U.S. or the West, and ask the long-suffering Russian people to tighten their belts further for the good of the Motherland.

The fact that Moscow knows it enjoys a free rein under President Obama’s lack of a foreign policy also enables this policy. This could be why Moscow has massed troops on the Ukrainian border and complained of a fictitious Ukrainian “border excursion” into Crimea. The Ukraine feint serves two purposes: providing a rallying cry for the Russian people and putting pressure on the West to remove painful economic sanctions.
This is also why Moscow wants so strongly to show that the U.S. and Russia are working together to destroy the Islamic State in Syria. This tactic is for domestic consumption. The message is that the pain that Russians are feeling right now is worth it: “See? Russia is saving the world from terrorism. We are leading the only superpower in the world to do the right thing!”

The West should not underestimate the Kremlin’s ability and need to maintain this strategy. It is an imperative for President Putin and his aides, who have failed to diversify the energy-dependent economy or to tackle the question of pervasive corruption. In the short run, Moscow will continue to sell Iran shiploads of sophisticated weaponry to bring in foreign hard currency and support an industry that is vital to the Russian economy. All of those billions in cash that President Obama flew to Iran in the middle of the night in January went straight to the Russian federal budget.

The ramifications of continued oil price weakness will inflict further pain on ordinary Russians. The misery index — unemployment plus inflation — will continue to rise. Moscow will need to find new ways to relieve this pressure. The remaining months of the Obama presidency will be an especially dangerous time, but it’s the next U.S. president who will have to deal with a bear backed into a corner.

Russian Werewolf May Have Had Dozens Of Victims