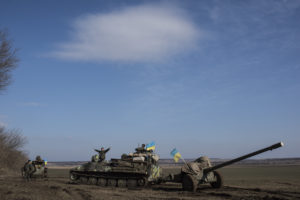 Ukrainian president Petro Poroshenko threatened to declare martial law in Ukraine if the conflict with pro-Russian separatists in East Ukraine worsens. Violence has escalated to the highest level since the Minsk peace accords were signed last year between the separatists, Russia, Ukraine an other Western powers.

“If the situation escalates in the east and in Crimea we don’t rule out the possibilities (that) we will be forced to introduce martial law and announce a (further) mobilization,” Poroshenko said in a televised speech from the western Lviv region, reports Reuters.

The escalation of the Donbass conflict and the massing of Russian troops on the Ukrainian border is most likely a negotiation tactic of the Kremlin. Russia wants the sanctions on it imposed after its seizure of the Crimean Peninsula removed immediately. These economic penalties are causing serious harm to its economy along with the collapse of crude oil prices and natural gas. The Kremlin refuses to enact the economic reforms necessary to jumpstart its moribund business environment so forcing the sanctions to be removed may be the Kremlin’s only way to relieve economic pressure that could eventually threaten its grip on power.

Stratfor reports on the massing of up to 30 separatist tanks near the village of Avdilka in the Donbass region along with artillery and other armored vehicles. Russian president Vladimir Putin is a master of escalation and deescalation. With this threatening development, he is prepping the West for more concessions which could include NATO troop movements, Ukrainian land, or sanctions relief. 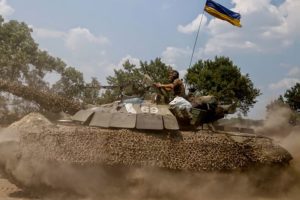