We have written many times that Marxism, at its root, is simply extreme irresponsibility. You don’t want to, or can’t, make something yourself (or trade in a fair way with other nations) you just take it with the force of government…someone else can make it, right? Might makes right…I want it, I take it.

So we find it extremely ironic that today, the European Union is sending avowed Marxist, President of the European Commission Jean-Claude Juncker, to deal with Trump in D.C., and according to reports, ‘head off Trump’s trade policy’, ie, stop the tariffs. Europe does not like having to play on a level playing field with the U.S. when it comes to trade and recently rejected a Trump proposal that there be no tariffs on either side.

In early May, Juncker traveled to Germany to help China celebrate the anniversary of Marx and his tenants, which led to the deaths of over 200 million people in the twentieth century. According to the Estonian Institute, Juncker justified the founder of communism in saying that Marx does not bear responsibility for the horrors that his followers must be held responsible for. During Friday’s events in Trier, Juncker held a speech and opened exhibitions. China presented the city of Trier with a big statue of Marx which was unveiled as part of the festivities.

Before this trip to Washington, Juncker spoke with Chancellor of Germany Angela Merkel, President of France Emmanuel Macron, Prime Minister of the Netherlands Mark Rutte and Chancellor of Austria Sebastian Kurz, according to European Commission Deputy Chief Spokesperson Alexander Winterstein. Trump will receive Juncker in the White House.

“Both presidents will have an opportunity to discuss issues of interest for EU and U.S. relations, particularly on trade”, Winterstein said 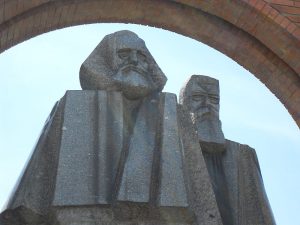 UKIP MEP and the party’s former leader Paul Nuttall said: “It is appalling that Jean-Claude Juncker feels it necessary to commemorate a man whose ideology – Marxism/Communism – led to more than 100 million deaths…Both Marx and his warped ideology should not be commemorated, they should be consigned to the dustbin of history.”

Somehow we don’t think Juncker will get what he wants when he meets with The Donald.