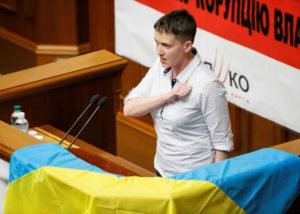 Nadia Savchenko, the Ukrainian helicopter pilot who was captured and sentenced to 22 years in a Russian jail, then pardoned in a prisoner swap with the Kremlin, has called for dialogue with the pro-Russian separatists in the Donbass region of East Ukraine.

Savchenko was voted a member of parliament in captivity and rumors are spreading that she could be the next president of Ukraine. Upon return to Kyiv, she has called for continuing diplomatic pressure on Russia but also for a dialogue with those who wish Donbass to belong to Russia.

“We should establish direct internal communication without third or fourth parties,” said Savchenko in a radio interview. She added that was ready to negotiate with Alexander Zakharchenko, the leader of the Donetsk People’s Republic, directly.

“These are terrorist organisations who are acting on our territory under full control of the Russian aggressor,” said Andriy Parubiy, speaker of the Ukrainian parliament, rejecting Savchenko’s idea. “I don’t think we can carry out any negotiations with these people.”

However, a dialogue is one thing but a peace agreement is another, especially one that will last as the last several have not held for very long. “There is no way that [Ukraine’s president Petro] Poroshenko has the political capital to take real steps such as pass an amnesty,” said Alexander Khodakovsky, one of the leaders of the self-declared Donetsk People’s Republic. “And how can we give up control of the border without an amnesty?”

Khodakovsky, the separatist leader, said the most likely outcome was an uneasy continuation of the status quo, which could last for years, reported The Guardian.

“It’s like closing down a nuclear reactor. You can’t just pour water on it or you get Chernobyl. You have to leave it to cool down for some time.”

Obama Wants To Get Another ‘Deal’ In East Ukraine

Soviet Ship Ramming US Carrier In Black Sea In 1988

Russia Is Scared Of The S-400 Killer…

Having James Bond Flashbacks With This One…