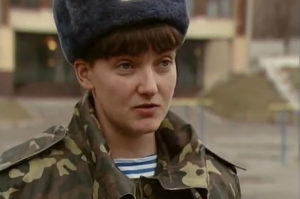 Ukrainian female pilot Nadia Savchenko was released in a prisoner swap for two Russian soldiers captured in the Donbass region of East Ukraine. She had been held since 2014 on murder and terrorism charges and extradited to Russia. Many analysts thought the prosecution had political motives.

“Nadiya Savchenko was met by Ukraine’s president at Kiev’s Borispol airport, where she made a passionate speech sarcastically thanking those “who had wished me evil”. “Through you I survived,” she said.

Savchenko, who was exchanged for two Russian intelligence operatives held by Ukraine, thanked her supporters, and promised to fight for the release of other Ukrainians in Russian jails.

In Kiev, she appeared with the president, Petro Poroshenko. “Just as we brought back Nadiya, so we will bring back the Donbas [region in eastern Ukraine] and bring back Crimea,” Poroshenko said. He vowed to secure the release of all Ukrainians held in Russia and what he called “occupied territories”.

Savchenko paid tribute to “all those who had died for our Ukraine”. Flanked by her mother and sister and holding a Ukrainian flag, she posed for a photo, reported the Guardian.” 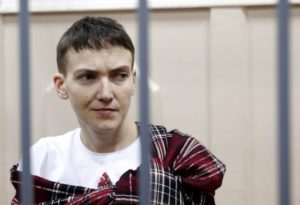 Russians Yevgeny Yerofeyev and Alexander Alexandrov were flown from Kyiv to Moscow and reunited with their families. Western governments praised the prisoner release and the Kremlin’s pardon of Savchenko. 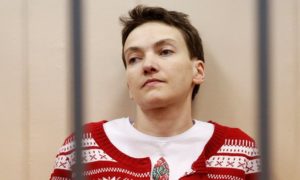 Savchenko’s lawyer, Mark Feygin, confirmed she was on her way home. He wrote on Twitter: “Two years ago I promised Ukrainians I would do everything possible to free Nadiya … I know how to keep my word. She’s heading home, to Ukraine.”

Russian Arctic Airborne-Could You Do This?

Poland vs German Firepower, Who Comes Out On Top?

The Real Chinese Dragon, Exposing The Power Of The Chinese Air Force